The Toolstation Western League have come up with a great initiative to encourage more people to watch Western League football this weekend. They have staged local games throughout Friday, Saturday and Sunday aimed at Groundhoppers descending on the West Country.

Groundhoppers are supporters from all over the UK and Europe who try and visit as many grounds as they can in a season. They will often stay overnight in a place that has plenty of games on that particular weekend. There are different versions of groundhoppers, such as visiting all 92 football league grounds. However visiting non league grounds has also been popular since the 1970s in England.

Now with people living in a digital age fans can upload pictures and share their stories a lot easier. The Western League have very sensibly seen the sense in helping their clubs increase their match day attendance by being able to host games throughout the weekend.

This helps the fans take in as many grounds as they can that weekend and helps the clubs gain more local support. Keynsham Town FC as set to benefit for this as they are the last game of the day on Saturday.

Ko is at 7.45 at home to Westbury which allows fans of other non leagues a chance to get to it as well as players and managers of local Saturday teams. Entry has been reduced to just £5 adults at Keynsham and kids go free! 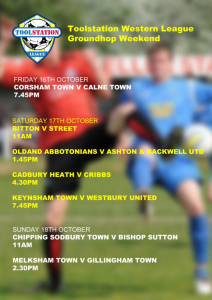 Usually smaller clubs in the Western League struggle to compete if Bristol City, Rovers or Bath City are at home, so if successful there could be more evening/morning games on a Saturday.

So this weekend enjoy which ever game you can get to on Saturday at 3pm but then go and check out a local game, either before, after or on Sunday.