England Commonwealth Games player Daniel Reed found some time out of training to speak to M Tanner Sports in the 3rd 5 Questions interview.

1) The draw has put you against Ashley ROBINSON, Jody BEVINGTON and Marcus GILES have you ever played any of them before?

I have played Ashley Robinson before in the European Championships a few years ago. I won 4-0 but he is working hard out in Germany now so improving a lot.

2) You have the Eng vs Aus match on the 20th as your last team event before the commonwealth games. will your preparation for a team event be different than for this individual Open?

It’s all part of preparation for the Commonwealth Games, the ultimate goal is to perform at my highest level there. So my preparation will be similar for both, trying to implement the things I am working on in practice. I suppose the closer I get to the games the more importance I will put on results. 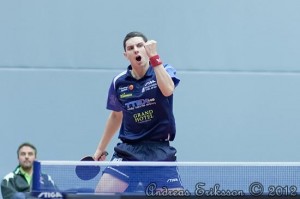 3) Drinkhall and Pitchford are favourites for this Open but who else is in with a shot at winning it?

It’s a strong competition. I think particularly Salifou and Pattantyus are good players – Salifou having won 2 world tours last season. However at the stage late in the season you often get surprise results and I’m sure that will be the case

4) Do you get to watch much of the under 21s? if so who are the players coming through at the moment?

I spend a lot of time with Sam walker who is a big talent and always working hard, so I am sure he will continue to build since his breakthrough into the national team. Also both Weerasinghe and Lawrence have been improving a lot and hopefully they can start to challenge for the men’s national team places in future.

5) Finally BT Sports are covering the latter stages, do you think this is a big draw for players to enter this particular Open?

The event has grown again since its success last year and with BT Sport involved and good prize money it has the potential to attract. Strong players in the future as well, looking forward to it!

Best of luck to Daniel in the Open, good to see players so excited to be playing in an English tournament!