The second Five Questions interview is with the youngest member of the England’s Commonwealth Games women team; Tin-Tin Ho. She will be competing at the Heritage Oil Open (Sussex Open) next weekend, with a very good chance of going all the way to the finals and she’s still just a teenager.

1) The draw has been made and you are against Karina Le Fervre, Amy Blagbrough and Maria Tsaptsinos in your group. Have you ever played any of them before?

“Yes I have played all of them before. I have played Maria and Karina many times throughout the years as we are also team mates and usually have some close matches.”

2) At such a young age how do you cope with pressure put on you after a fast rise into Women’s competition?

“I try to treat every competition the same. I try not to think about the result too much and focus on what I should do.” 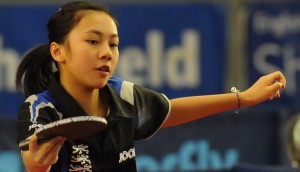 3) Who are the players to beat in this tournament?

“It is a really tough tournament and there are some very good players from England as well as abroad so every match will be a tough one.”

4) What more can be done to get girls into playing table tennis?

“Having more table tennis clubs in all girls schools during lunch times.”

5) Finally the latter stages will be shown on BT Sport, will that be on your mind should you make those rounds?

“Yes probably as it is great for English table tennis to be aired on BT Sport and also very exciting.”

Many thanks to Tin-Tin for this interview and best of luck at the Open. Enjoying reading the two interviews so far? Get in touch and let us know or any improvements that can be made!