In a game when keeping a clean sheet was a priority City did just that to claim their first point of the 2014/15 season. The fans may have stayed away but Bath came out with more conviction and determination to kick start their season. The only thing that ruined an otherwise positive game was the serious injury to Phil Walsh in the heart of the City defence. He landed awkwardly in the second half after going up for a header and was stretchered off to the RUH with a suspected broken ankle, he is likely to have a long injury lay off now.

Chelmsford started the game brightly and soon tested a shaky City backline after some hesitant defending on 13 minutes. The ball was allowed to bobble through the box with Joe Ward poking it goal bound but Andy Gallinagh recovered from a slip just in time to put the ball round the post for a corner. Bath had tweaked their line up for the 3rd game running and were playing with a back 5 with 3 in the middle of the park and 2 up front. This formation seemed to suit them well with the inclusion of Dan Bowman giving them a more attacking edge down the right hand side.

Ward had another chance on 27 minutes when he cut in on the right to unleash a decent drive on his left foot. Jason Mellor was equal to the serving shot though and saved well. The midfield 3 of Frankie Artus, Chris Allen and Ben Adlesbury were starting to click on the half hour mark. Allen’s through ball for Artus put him one on one but Nicky Eyre, in goal for Chelmsford, did very well to save at Artus’ feet. Bath’s game plan must have been to have a go from distance as Bath started to look to shoot from the midfield throughout the game; Artus was the first to go wide.

Chelmsford were still dangerous in attack and Glen Southam’s free kick found Mark Haines, however his free header could only be directed into Mellor’s arms; much to the relief of the back line. Addlesbury then hit a long shot wide after decent build up play from Bowman and Artus on the right hand side creating the space. Walsh headed over the bar from an Allen free kick when Andy Watkins was fouled two minutes before half time. There were then two more long range efforts on 45 minutes, first Addlesbury saw his effort land on the roof of the net. Then Artus had the best chance of the game to open his account; his fierce effort cannoned off the underside of the bar and out.

So it was 0-0 at half time with Bath growing in confidence but Chelmsford were still looking lively on the counter. Lee Sawyer nearly put Chelmsford one up within a minute of the restart when Bath’s defensive nerves returned, but his shot was just wide from the edge of the box. Bath then had a succession of corners with the best chance falling to Addlesbury from an Artus corner, however his header went just wide of the far post with the keeper rooted to the spot.

Bath then had a major blow when Walsh had to be taken to hospital with a broken ankle after landing on it at an angle. The game stopped for 5 minutes as players and management from both teams were concerned with the players welfare. Pat Keary made his home debut coming on for Walsh at the back and looked comfortable. The best save of the afternoon, if not the month in this league, came from Eyre on 65 minutes. Addlesbury had the time and space to touch the ball inside from the left 40 yards out and he released a brilliant top corner effort but Eyre jumped and tipped the ball over for a corner. Four minutes later Artus tried a lobbed effort from a similar distance but the ball sailed onto the roof of the net with Eyre having no chance after being so far off his line.

Ross Stearn, on for Watkins, saw a free kick go wide after finding a gap in the Chelmsford wall. The last ten minutes of the game still saw Bath pressing for a clear cut chance with a good range of passing finding the gaps well in midfield. There was still a chance for both teams in the 6 minutes of extra time. Bowman receives the ball from Stearn out on the right as Bath flood the box; his cross finding David Pratt but his shot was straight at Eyre. Then a few moments later Southam managed to find a yard of space on the edge of the Bath box but couldn’t get the power on the well placed shot with Mellor saving and holding.

Overall a much improved Bath performance against a Chelmsford side who will be concerned with their lack of goals this season. That’s 3 games each with no goals for either side but both move off the bottom of the table with a point each. Bath have to wait until Bank Holiday Monday to put that right against Havent & Waterlooville at Twerton Park, whilst Chelmsford entertain Sutton Utd at home on Sat 23rd. 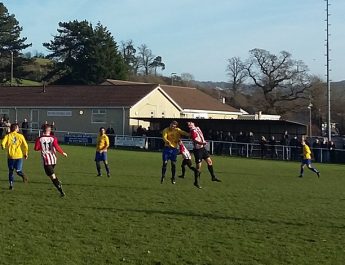