Deep in the heart of Keynsham a new form of football has been handed it’s debut and is proving popular with many of the locals.

The sessions are designed to give people over the age of 55 the chance to play football at their own pace whilst enjoying the healthy, social and fun benefits that football has to offer.

Walking Football made it’s debut in Keynsham on Friday with 15 participants getting involved in the session including ex-Oxford Utd all time top goal scorer Graham Atkinson. The session has been met with a great amount of positivity from players and coaches. The sessions look to keep growing and help also strengthen the Keynsham community. 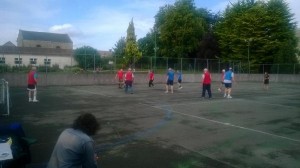 Walking Football has grown in popularity recently with many football clubs across the country including Bristol City, Portsmouth, Manchester City, Stoke, Blackpool all setting up sessions in their local communities as well as being supported by the FA. It was also recently featured on BBC Breakfast which has prompted a increase in demand for these sessions up and down the countries.

The sessions take place on the courts in Keynsham Park on Friday mornings from 10-11.