Bath Futsal played their second game of the season on Sunday 21st Sept and narrowly lost to a travelling Hereford side.

Hereford contacted Bath earlier in the week to arrange to play their home game away in Bath due to hall booking problems their end, yet this venue change didn’t hamper them too much. A goal in the last three minutes saw them grab all 3 points in a league that is already looking tight despite just being two games old. Their keeper put in an impressive display to keep Bath at bay in the final few minutes.

“A last minute recall for Graham Gardiner saw him score and prove why we are missing him this year. Injured Phillipos Phillipou got on the score sheet after a tidy finish, and consistent player Diego Ojanguren showed he is definitely a regular in the side after several good performances. It was a very hard game for the team which saw many injuries hit the Bath Squad. We feel a draw would have been a fair result, now we’re looking ahead to Sunday’s big game against Kettering Futsal club, in what now is already a must win game.” 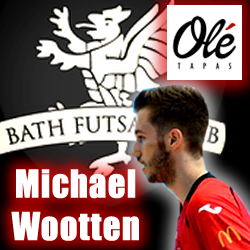 We managed to catch up with Michael to get his further reaction to how the season has gone so far:

1. How are the players after your latest narrow defeat?

The players are a little disheartened. We have come so close in many game but we just cannot secure the win. I believe in all the players and when the first win comes everything else will fall into place.

In terms of physical condition I have several players out through injury and playing with knocks. We had a very physical friendly a few backs that has really taken its toll on the squad, slowly players are making come backs but were still a month or so away from having everyone back.

2. Injuries are hampering your preparation you had in pre-season, are you having to change your game plan now?

Yes, I have to account for the players that are being selected and the attributes they have. The players that have stepped up have done well but it will take them time to build the experience and knowledge needed to have the same impact on the game.

3. With Frank Cobby moving on up to the first team are there any other players knocking on the door at the moment that may have to make their debuts quicker than you would have liked?

In a way yes, I have a couple of players expected to make their debut this weekend that ideally I would have liked to had in training for another month or so. It’s difficult with us losing a couple of players due to leaving for Work/ University. The squad is ever changing and players are expected to do the job when called upon. We have had a recent influx into the Development squad from the Spanish community locally and I am hopeful from the early signs several of these players will be making National League Debuts soon.

Exploring the growing game of Futsal

Walking football in the West Country 2014