Wales begin to show their potential

The rain stopped as Wales played their 3rd 2016 European Qualifying match against Cyprus in Cardiff on Monday 13th October. Just over 20,000, of the 21,000, Welsh fans roared their team onto a 2-1 victory to see Wales maintain top spot in the group.

Simon Church was forced off with only a few minutes on the clock, which saw the introduction of David Cotterill, after a strong challenge and there was anger as Gareth Bale was chopped down just minutes later as Cyprus looked to get amongst the Welsh team in the opening period. The referee was in for a tough night and had to go his pocket nearly every 10 minutes over the course of the game. Wales didn’t let this disrupt their own game plan and it was Wales who found themselves in complete control on 23 minutes. They scored through a fortunate goal from Cotterill’s cross on 13 minutes and a decent finish for Hal Robson-Kanu from a Bale flick through ball on the 23rd minute.

The atmosphere was fantastic from the Welsh fans who created an absolute wall of noise throughout the ground. However Cyprus did pull a goal back on 36 minutes but on general play in the first half Wales were very much on the front foot and really taking the game to Cyprus. It was refreshing to see play spreading throughout the whole squad and not everything coming through the 86 million pound man; who played in more of a free role behind the striker and even managed to track back well. 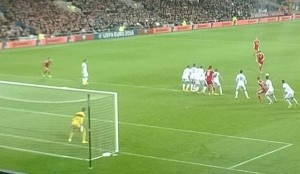 Chris Coleman would have had an easy enough team talk at half time to tell the boys to keep going in the same vein and more goals would come. However that talk was ripped up just three minutes in to the second half as Andy King as send off for a late challenge, which was judged to be behind the player.

This determined Welsh side didn’t fold and even created some decent opportunities for themselves. Bale went up front and didn’t stop running and taking on players in and around the box to relieve some pressure from the backline. Cyprus would be annoyed that they couldn’t find another goal as they had most of the possession in the second half but Ashley Williams, James Chester, Neil Taylor and Chris Gunter stood firm and even played the ball out of defence a number of times; encapsulating their new found confidence this campaign.

When the final whistle blew there was a great sense of pride and belief from this group of hard working players. If it had been noisy during the game then it was off the charts on the whistle as the fans showed their appreciation to the players.

It was great to see so many young people and families at the game with everyone joining in the signing and chanting. At just £20 for adults it’s no wonder why their getting the crowds and now the atmosphere to make Cardiff an extremely difficult place to come. So if you ever have the chance of watch an international game live then go and do it, you won’t be disappointed!

On the footballing side of things when you add in Aaron Ramsey, Joe Allen and Sam Vokes into the squad then you have a very decent side who will not only be able to play the ball about but also offer much more of a threat going forward.

Their next test will be on November 16th when they travel to Belgium.