Keynsham continue to keep pace with Cheddar at the top of the Western League Division One with a narrow win over inform Warminster Town.

Unfortunately I could only make the last 30 minutes of the match. I was informed that Keynsham had hit the woodwork in the first 45 minutes. So I joined the action at 0-0 around ten/fifteen minutes in.

Harley Purnell takes a long shot which is parried to Matt Brown. The striker passes to Stefan Lee, who combines with Daniel Spill but he could only put it wide as Ks press.

The next chance fell to Craig Wilson with a header from a Brown cross, although it is easily held by the Warminster keeper.

Warminster are dangerous on the break, the more John Allen’s men pushed forward in search of the win. Keynsham’s Ashley Clarke punches an in swinging cross from the right, preventing a free header.

Mike Grist had to also be alert to clear the ball off of the line for the home side moments later. Warminster’s number 8 delivers a freekick from the left, which leads to a scrambled in the 6 yard box before a clearance off of the line by Grist.

The break through finally came as the Keynsham pressure told on 86 minutes. A spell of controlled pressure from Keynsham’s midfield lead to Matthew Long’s cross for Lee to finish smartly at the near post.

Warminster still come forward well with a couple of snap shots in the final few minutes before Keynsham got hold of the ball to relieve the pressure.

Penalty on Adrian Harvey or not? 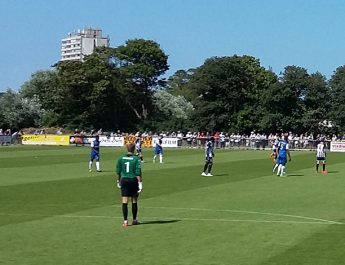