It may have been against a team in the league below but to score 7 goals in a match is great. As I’ve said in previous posts, it’s only a matter of time before the goals come flooding in. Let’s hope we can carry them in to the next league game.

Rovers were playing Conference South side Dorchester in the FA cup fourth qualifying round and the game finished 7-1 to Rovers. Two goals came from Andy Monkhouse, one from Mat Taylor, one from Lee Mansell and a hat-trick from the impressive youngster Ellis Harrison.

I was personally pleased for Mat Taylor as he has silenced his critics by scoring in open play. He has come under lots of negative comments in the last few weeks so well done Taylor! I was gutted I couldn’t get down for the game due to work. Hopefully I’ll be able to go to the next few home games to make up for lost time.

Monday night saw the FA cup draw – I love it! The excitement of who you’re going to be playing and seeing who the others teams will have to face. Rovers were ball 64 and we got drawn against Tranmere Rovers away, not quite the tie I wanted as I was hoping for a London team away to make things easier for me!

I’ve got many happy memories of Bristol Rovers and the FA Cup. One of my first being up at Derby when Nathan ‘The Duke’ Ellington scored a hat-trick against the then Premier League side Derby, resulting in Rovers winning the game 3-1. And who can forget that great run where we got to the quarter finals losing out to WBA.

Despite not making it back to Bristol for Saturday’s match I still managed to get my football fix by making the short trip up the road to join some friends at AFC Wimbledon. They played against Tranmere and the game finished 2-2. Tranmere didn’t really impress me, so why can’t we beat them? 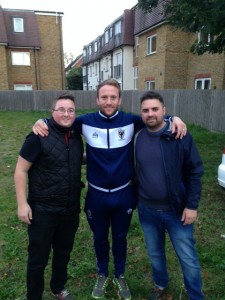 At the end of the game we caught up with former Rovers player and Bristolian Sean Rigg. We had a chat about Rovers and his football career since he left us, he’s such a nice guy. He was really pleased Rovers had just won and seemed genuinely interested to hear more about it – cheers Sean!

Rovers also managed a hard fought win away against Telford on Saturday (1st). Ollie Clarke got his 3rd goal of the season in what was an even game by all accounts, but the downside is that Andy Monkhouse got a straight red so he will be out for the FA Cup game.

A few people have said a cup run will distract us from the league and put pressure on the squad, but I don’t think this will be the case. It will be great to go on a run, and why can’t we beat Tranmere? As I mentioned earlier, when I saw them last Saturday they didn’t impress me. We’ve got a decent squad and some technically decent players so I think we should make the most of it.

What’s everyone’s thoughts – go for a decent cup run or concentrate on the league?