It’s taken a while but finally I’ve managed to get an interview with Larkhall Athletics’ captain Ollie Price. Ollie has recently joined the club once they sealed promotion to the Southern League Div One South & West with the club doing extremely well so far this season:

1. The Larks are off a flying start this season after promotion, how have you found the adjustment so far?
I only joined at the start of this season but have played at Southern League level since the age of 18, so I know what is needed to play at this level. We have started really well. After losing the opening two games people would have been writing us off but with the lads still buzzing from what was achieved last year we were confident that we would soon get the results our play deserved. We all believe in the manager and we have a good spirit about the squad. So I’m really looking forward to the rest of the season.

2. There are a lot of cup games every season, how important are the more local ones, like the Somerset Premier Cup, to the team?
The local cups are great because it obviously produces a lot of derby games, which are great to play in. I’ve been lucky enough to get to two Somerset premier cup finals, winning one and losing the other. Last year the boys did the league and cup double so hopefully this year we can get to another final.

3. Has the team training changed from last season?
The training this year has been tough but enjoyable, especially pre season. No one likes running but its something that needs to be done. You need to have everyone fit and ready as every game can be a battle and physically demanding. 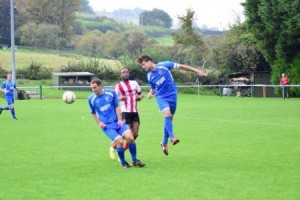 4. Its coming up to Christmas now the gaffer must have set a points target, will the end of season aim change after such a good start?
This season was just about survival but now we’ve started well and shown we can compete at this level; our own expectations have grown. We’ve had a chat recently and the gaffer wants us to get to 40 points asap. So that’s our target for now and then after the Xmas fixtures we can Review our goals depending on our league position.

5. Your fixtures clash a lot with Bath City this season if you had to sell Larkhall to potential sports fans in Bath then what would you say?
I would start by saying its a fantastic family run club with really good people behind the scenes and we’ve also got a good squad of players too. The club is buzzing at the moment from the recent achievements of last season and winning team of the year, all whilst celebrating the clubs 100th year!

Bath City are always going to be a bigger club but that doesn’t always mean your going to watch a better match. Larkhall are a club on the up and if fans want to watch a decent brand of football and enjoy a good afternoon out with the family then Plain Hams the place!

Thanks for that Ollie, looking forward to catching up again later in the season. Larkhall are taking on Cinderford Town in the league at home this Saturday, 3pm KO at Plain Ham.