On Tuesday 18th November there was a classic game of two halves for City fans to forget in the Conference South against Gosport Borough.

City had the better of the first half by scoring on the 14th minute and then hitting the post early in the second half. However their failure to score a second cost them as Gosport slowly found their way back into the game. The equaliser came on the 69th minute with an unfortunate own goal ten minutes later, the final goal coming on the 91st minute.

Now you could be forgiven in thinking that Gosport just played much better over the course of the 90 minutes and deserved their win; well you’d be half right. It was a subtle change in formation by the City management, to try and push on and win the game, which made a big difference in the end. For a full standard match report of events in the game then please see the well written Chronicle report by Neil Rose.

Bath started the game with a rarely used 4-4-2 formation; 4-3-3 is usually employed so far this season. It was down to this 4-4-2 that City were dominant in midfield up until the 70th minute. They used the diamond tactic with one defensive midfielder in Chas Hemmings; who has been impressing with his range of passing in recent weeks. Then you had Chris Allen and Frankie Artus, both finding their form again after injuries, operating in the central midfield roles. Ashley Kington was sitting just behind Dave Pratt and Andy Watkins up front.

This gave room for either full back to get forward on which ever flank the play was, with Hemmings sitting deep to cover, and this system was working well. However when City did conceded the equalising goal this sparked a quick reaction from the bench to try and kill the game off. They took off Kington and replaced him with Ross Stearn, which would have usually been a good move. 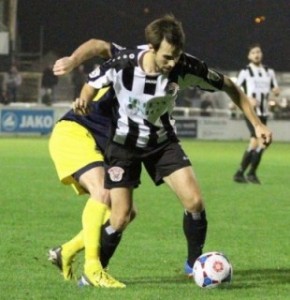 Stearn is quick and skilful as a winger, but City weren’t playing with wingers. So the formation changed to 4-3-3 with Stearn on the right and Watkins on the left with Pratt in the middle up front. This left 3 men forward all the time so Allen and Artus had to work very hard in midfield for the last 20 minutes with the full backs still encouraged to get forward.

This was a step too much for the tiring pair and Artus was eventually substituted for Phil Walsh with just 5 minutes remaining at 2-1 down. Walsh was brought on to give an aerial focal point up front; now four players remained forward. Despite this Jason Mellor, in the City goal, was still trying to play the ball out from the back and was eventually caught out with a poor ball out to his defence which was pounced upon to make it 3-1.

Gosport kept their shape throughout and came out in the second half with a lot more energy and desire. They also tried to play the ball more down the wings to commit the full backs and find the gaps in the middle of the park. Gosport showed why, in the last half an hour of the game, they are hard to beat away from home this season and how they can punish teams if they switch off if even for a minute.

So City will now travel to Chelmsford on Saturday 22nd November looking for a win in a tight league. It’ll be interesting to see what formation they opt for this time around with Nick McCootie and Dan Bowman rested on Tuesday night; as these two players were important in the 4-0 win at the weekend using the 4-3-3 formation. Bowman offered real pace going forward from full back with McCootie proving a real handful for the centre backs allowing Pratt to attack the full back out wide.

It should be a great game so make sure you tune in to our friends at Bath City Radio if you can’t afford the away day, or better still get to a local game and listen again afterwards!

Easter Weekend Round up Part Two