On June 13th Bristol boxer Lee Haskins lifted the IBF World Bantamweight title in a great night of boxing for the local area. There was a high class of boxers on the undercard that night including Nutland, Winters and Hamilton along with Tyson Fury’s brother Young Fury.

Also on the undercard was a young boxer from Frome. Ryan ‘Somerset Stallion’ Wheeler was fighting his third professional fight. In front of a full house and television cameras Ryan took on Janis Puksins. The Latvian turned out to be a tougher opponent than anyone thought, although Ryan managed to control each round resulting in a deserved second win.

To date Ryan has won two and drawn one (against an opponent a weight class higher) and looks set to begin a very successful career in boxing. Ryan recently signed a four year contract with Bristol Boxing who entered him on the undercard for the Lee Haskins title fight. 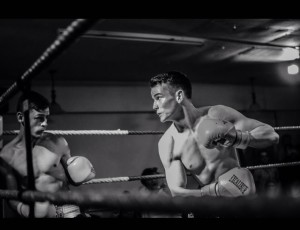 Ryan was born in Bath and grew up in Frome until 2004 when he moved with his dad to Leicester. Whilst he was in Leicester he began to box at the age of 9 at the Earl Shilton Boxing Club. He also went on to win his first title with the club.

In 2010 he returned to Somerset with his dad. Over the next four years he boxed for Trowbridge Academy of Boxing where he reached the final of the National Championships. In 2014 Ryan turned professional and began his career against Elvis Makoda. The fight went the full four rounds and ended in a fair draw, with both boxers fighting their hearts out. Next up was Joe Beeden. This fight also went the distance but with Wheeler controlling the fight with ease. The result could only go one way and Ryan had his arm raised in his first professional win.

Currently Ryan is supported by two sponsors, MetroRod Bristol and the Red Falcon Project. Ryan is currently looking for additional sponsors to help him progress.