Bath City battled back from a one goal first half deficit to salvage a point from a tough encounter with Hemel Hempstead Town and, in the process, preserved their unbeaten start to the campaign. 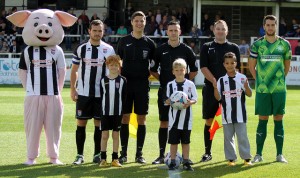 City began in buoyant mood with Nick McCootie breaking clear on goal in the 2nd minute, but was denied by a brave save from Hemel keeper Jamie Butler who took the ball flush in the face.  However, the striker was ruled to have been in an offside position and Butler’s pain, for which he received lengthy treatment, proved needless.

The Tudors, sporting a truly grisly green kit, began to impose themselves on the game, and Kyle Connolly fired narrowly over the angle of crossbar and post from the edge of the home box in the 8th minute.  Lofty centre forward Oliver Hawkins nodded over Steve Phillips’ bar on 10 minutes after being found unmarked by a cross from the right.

The visitors took the lead after 15 minutes, when Matt Spring’s long free kick into the box from the left was again met by Hawkins, whose well-directed header arrowed into the corner of the net beyond Phillips’ despairing dive.

Aden Baldwin nodded over the Hemel bar from Kevin Nicholson’s long throw-in as City tried to respond immediately, but it was the away side that should have increased their advantage after 20 minutes.  Ben Herd’s cross from the left picked out Jamie Slabber in front of goal, but the striker headed straight at the grateful Phillips. 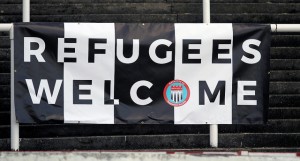 Bath gradually gained the upper hand in terms of possession as Hemel were pushed back for the first time.  Ashley Kington was well wide with a half volley from 20 yards, and the hosts had an excellent opportunity to draw level on 33 minutes.  Jon Davies fed McCootie, who found space down the inside left channel but, with Dave Pratt unmarked in the middle, the striker was guilty of being caught in two minds and the chance was lost.  In between these two incidents, Slabber worked his way towards the City byline, and Phillips was required to make a save with his feet to repel a cheeky attempt to beat him at his near post.

As half time approached, McCootie robbed Terrell Forbes in a dangerous position and raced goalwards, only for Butler to produce an excellent diving save.  There was still time ahead of the break for Davies to see his low shot hit the outside of the side netting after good approach work by Pratt.

Chas Hemmings sliced a shot from distance well wide of the target immediately after the restart, but it was Hemel who were playing the better football.  Indeed, the visitors created another golden opening in the 50th minute when a left wing cross from Connolly found an unmarked Slabber, but his downward header lacked both power and direction.

Bradley Williams and Dan Bowman replaced Davies and Kington respectively, and suddenly City found some forward momentum,  putting the Town defence under increasing pressure.  This paid off on 58 minutes when Hemel failed to clear a corner kick, and Baldwin drilled his low shot into the net through a crowded penalty box. 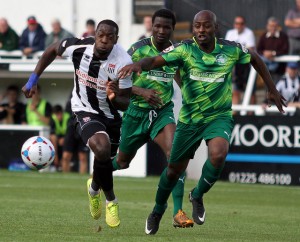 The hosts were now on top, and Pratt headed just wide of the far post after connecting with Nicholson’s curling free kick.  In the 68th minute, another Nicholson dead ball delivery was nodded into the side netting by Baldwin.

Williams then played the ball invitingly into McCootie’s path but, as the striker raced into the box, he scuffed his shot wide of the near post.   It was McCootie’s last action of the game as he made way for Andy Watkins, but this signalled a change in the balance of play, and the away side suddenly looked the more threatening.

Hawkins fired the ball into the net from close range on 79 minutes, but his celebrations were cut short by an offside flag.  A minute later, some calamitous defending by the hosts allowed Hawkins to steal the ball inside the 6 yards box, only for his shot to be deflected wide when he looked certain to score.

Hawkins was again close five minutes from time when he headed wide from a right wing cross, but it was City who spurned a great chance to take all three points after 88 minutes.  Nicholson’s cross into the Town box was cleared only as far as Williams, but the substitute under-struck his shot, and the ball was hacked to safety.

Matty Herriott fired over the bar from distance deep into stoppage time, and the home side held out for a valuable point, but not before surviving a further scare when Mo Shariff’s dipping cross drifted just wide of Phillips’ far post.

On balance, a draw was a fair result against a strong, mobile Hemel Hempstead side.  City showed great character to battle back after falling behind in the first half, and the away side ably demonstrated why they possess such an impressive away record.  Certainly, Lee Howells’ team will need to display continued determination and resilience as they face seemingly difficult away trips to Gosport Borough and Maidstone United in the coming week.

Wintle joins the 100 club for Ks