Football is the most popular sport in the world, millions play, even more watch and all of them enjoy the excitement of the game. Technology has come a long way since football was first ‘officially’ started back in the late 1800s and the internet has brought fans from all over the world closer together. So now it is great to see that Frame Football has reached the Bristol area.

Frame Football is a version of the beautiful game for those with disabilities unable to play the traditional game. It allows children and adults who need the use of a frame to walk to be able to get outside and enjoy the largest team sport through participation rather than just watching.

The sport has only been around in the UK since 2013 when a Birmingham based club, Coundon Court FC, offered it to local disabled children in the area. Since then it has gone from strength to strength with children being able to visit and play on Coventry City’s home ground, host their own tournament and see their membership grow each year.

“Richard Seedhouse at Coundon Court FC in Coventry started it and posted on Facebook. I then gauged interest in the Bristol area and interest was good. There is nothing like this in the area so enquiries are coming in from Bristol Bath Somerset Gloucester & South Wales” says Nick Dewfall, founder of Inclusive Sport.

It runs on a pay as you play basis at just £3 each week but it’s advised to book your place beforehand with Nick on 07411013516 or email nickdewfall@aol.com.

Nick adds his thanks to those helping him set up this first session “Aquaterra who run the facility are very supportive as are Quest 88 who make frames/bikes etc for people with CP & other mobility difficulties.” 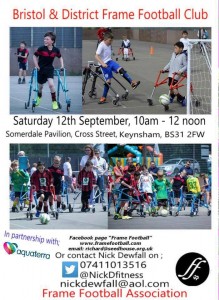 You can find out about the following clubs and businesses by clicking on their names below: