Bristol Badgers convincingly beat the Bristol Bats 19-8 in their second SWBL (South West Baseball League) derby to take revenge for the defeat earlier in the season.

This time around the Badgers were simply too strong for the Bats who had a day to forget. Runs flowed throughout the game for the Badgers with Pete Pfennig, Rhodri Theaker and Nils Eliasson scoring 11 runs between them.

Shortstop Eliasson was the game’s MVP for an excellent performance in the field as well as his contribution with the bat.

“The derby matches are always hard fought and we were delighted with the determination the team showed to reverse the result of the first match,” said Badgers’ manager Tom Hollies who shut down a possible Bats comeback in the sixth and seventh innings from the pitchers mound.

Ricky Gellatly, the Bats manager said, “This was a game we want to forget as our pitching, fielding and batting was not up to our usual standard. The Badgers were simply too good on the day.”

This was also the last game with the club for Badgers’ pitcher Pete Pfennig who is returning to his native Germany.

“Pete has been with us for five years and has been an excellent servant to the club and the game as a whole,” said Tom Hollies. “He made the trip from Newport for games and training and was always happy to impart his vast knowledge about the game to others. We all wish him well.”

Both Bristol teams now have a week off before resuming their league programme on Sunday 31st July. The Bats are home to the Plymouth Mariners, while Badgers travel to take on the reigning champions the Taunton Muskets. 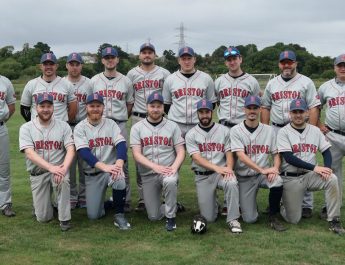