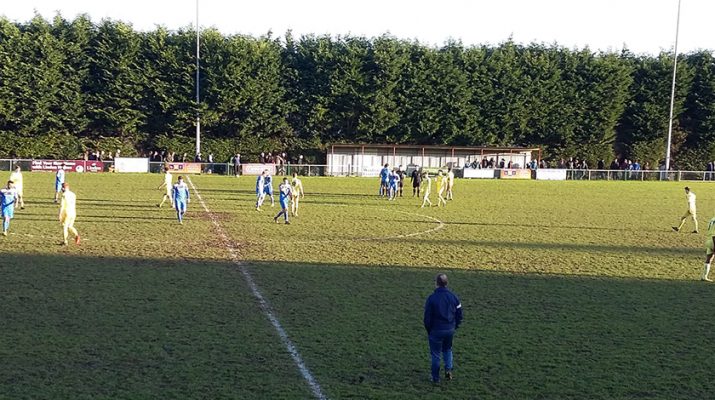 Larkhall played host to Yate Town in a 1pm ko on bank holiday Monday in a fiercely contested Southern League game. The Larks started the game well and were on top for the first ten minutes but couldn’t make their pressure count and Yate slowly managed to assert themselves.

Ex Lark Jack Camm floated a corner in on 12 minutes for Yate and Lewis Powell forced a good save from Ben John, who pushed it away. This resulted in Joe Raynes holding on the ball too long in the box and Ciaran Greening pressured the Larks vice captain into losing possession to Powell; but his shot only found the arms of John this time.

Yate were in again on 15 minutes as Powell was found with a long ball. The striker managed to get to the byline to cross for Luke Bryan with the Larks defence slipping over. This allowed Bryan to take a touch and shoot but John rushed out to meet the shot.

Powell was looking lively for Yate now and had another shot saved from distance before putting the ball into the back of the net. However he was judged to be offside after breaking free and heading in from a cross.

Joe Tumelty soon had a chance for the Larks from a throw in as he beat his marker only to see his shot go wide. Tumelty soon turned provider on 30 minutes as he got to the byline to set up Ben Brooks, however the striker opted to side foot the ball into the net rather than slide in but failed to connect.

The failure to take this chance proved costly as Yate were soon 1-0 up on 35 minutes. Captain Kye Mountford’s freekick was flicked on in the area as the Larks defence lost their footing and Camm was on hand to pounce on the loose ball; firing past the helpless John.

Conceding only fired up the Larks to push for a goal of their own and they didn’t have long to wait. A Joe Lyons corner on 42 minutes was headed in by the unmarked Ed Dryden at the back post to leave things all square at the break.

The second half was disrupted by a lot of niggly fouls and the referee was a very busy man. It wasn’t a dirty half by any stretch but chances were few and far between with both teams having a few half chances but neither team could play much football due to the whistle happy ref.

Both managers opted for changes up front though in the form of James Stinson for Larkhall and Jack Ball for Yate to injected some pace and energy into the game.

Yate had slightly more possession this half but it was the Larks that saw out the game with the better of the chances.

Lyons and Josh Egan combined well on 84 minutes with Egan roaming into the box unchallenged. The former Bath City winger fired the ball hard at the near post but Harvey Rivers managed to turn it around the post for a corner. Rivers was busy again a few minutes later when a freekick found Lyons ghosting in at the back unmarked only for the Yate number 1 to save well again. Tumelty fired over from the follow up.

Larkhall should have won it on the 90th minute after good work from Jamie Adams and Raynes on the right hand side. Raynes’ first shot was blocked but the ball fell to his feet. The young midfielder did well to hold off a challenge to gain a shooting position again but he lent back and his shot curled over and wide of the far corner.

My Larks MotM was Ed Dryden at centre back. The University of Bath student will now become a very important park of this Larkhall team following the recent retirement of Ollie Price. My MotM for Yate was easily Lewis Powell who was desperately unlucky not to get himself on the score sheet.

If you could put both of these teams together in this league then you’d have a team to rival Hereford at the top of the division!

Best of luck to both teams for the rest of the season and I hope to be able to get to another game at Larkhall very soon.

There was a collection at the game for former Larks player Jamie Mines who has suffered a horrific accident in the work place over the holidays.

“Jamie was working at height on scaffolding in Swindon and was electrocuted so severely he had to be rescued by the emergency services and his injuries were so severe he had to be placed into an induced coma and remains in critical condition in intensive care, he has had one leg amputated and lost all the toes on the other, and also had one arm amputated in order to keep him alive.” – taken from his ‘go fund me’ page

Over £250 was raised at the game and to find out more about this and how to donate then please click on the photograph below. Thank you. 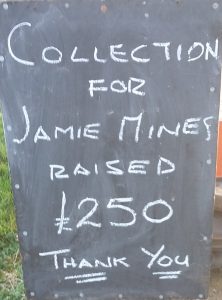