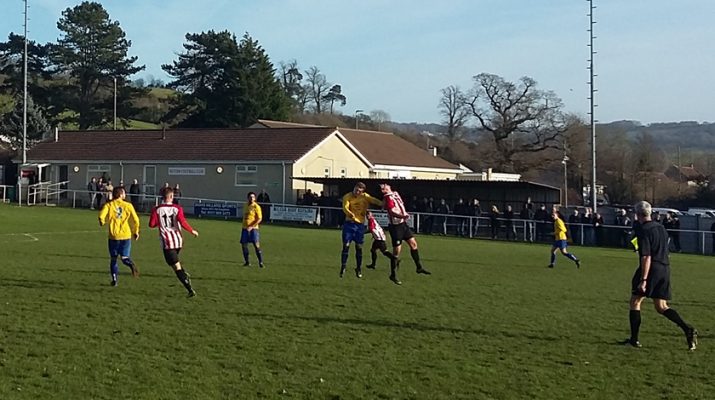 Boxing day is great for local derbies and early kick offs allowing fans to check out teams they wouldn’t usually watch before going the game of their choice. Last year I managed to take my nephew to his first game of football which was Keynsham vs Hengrove; with the Ks running out 2-0 winners in front of 135 fans in a 11.30 ko.

This year Bath City were playing at home against Hungerford at 3pm so I searched around for a local game to go to before hand. Bitton had managed to agree with Longwell Green to kick off at midday which would allow me to rush back to Bath. It also happened to feature my nephew’s team as he turns out in net for the Longwell Green under 9s.

Upon entering the ground half an hour before kick off it was easy to see which team were going to win as they warmed up. It wasn’t that one team was better than the other as both teams are playing at the wrong end of the table; 3rd and 4th bottom. I could tell by the pitch, well the slope really.

It looked like Longwell may have won the toss as the teams switched ends at the start of the match so that Bitton were attacking downhill. True to this, very loose/hastily assembled, rule Bitton started the game brightly forcing Longwell into a counter attacking game.

Bitton had their new signing Liam Orchard upfront, formerly of Bath Futsal, who looked dangerous when on side. His first chance fell on 18 minutes with a freekick to Bitton. The ball was crossed into the area with Steve Jones heading against the bar, falling into the feet of Orchard, however the former Bristol City academy graduate couldn’t get his shot on target.

There was a strong claim for a Bitton penalty later in the game from another set piece. Again Jones was involved as he looked set to nod the ball in from inside the 6 yard box after a cross evades the keeper however a push from behind just did enough to stop the connection. Longwell rode the luck there as the decision by the ref, to wave this penalty claim away, enraged the home bench and supporters.

Orchard had one last chance of the first half to grab a debut goal on the 40th minute. A cross came into the box which was nodded on by Josh Nelson but the small striker blazes his shot wide as the half draws to a close.

Longwell headed into the break the slightly happier team after their defence stood firm; albeit via some luck at times. They would just have to sort out their passing in midfield to enable their front pair to start to influence on the game. The Bitton management would have still been seething from the penalty call but encouraged that they have created so many chances. However due to the pitch the outcome would depend on which team was fitter and if both teams could keep up the fast pace of the game.

It was Longwell started to come into the game more in the second half and their first decent chance fell on the 53rd minute. Bitton’s number 1, Dan James, thumbled the ball and it was cleared off the line. Chances then fell thick and fast after this point for both teams. 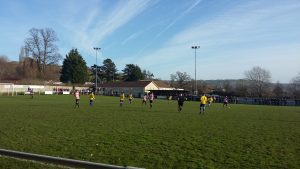 Last gasp blocks from the Longwell defence kept out Paddy Royal’s chance inside the box as Bitton continued to press as the half wore on. Longwell’s 11 shoots wide from a one on one after a blocked shot played him in. The number 2 for Longwell saw his names in lights as he advanced forward and hit an outrageous long shot, going harmlessly over. Their substitute Taylor McCormick should have put Longwell 1-0 up with their best chance of the game so far. On the counter Longwell’s number 10 hit a shot come pass falling into his path but his finish went wide of the post.

Chances continued to fall for Bitton in the last 15 minutes as they looked to push on for all 3 points attacking up hill at a relentless tempo. Orchard had his second clear cut opportunity to score when he was picked out with a cross from the right, unmarked in the box, but the striker could only place his free header over the bar.

Paddy Royal was then sent up front after a substitution and should have won it for the home side. The Longwell Green defence put everything into this 90 minutes of football and threw two bodies in front of his shot inside the 6 yard box and managed to scramble the ball away.

The last minute produced the game’s first really good save; from Longwell’s Oliver Player. Orchard turned on the edge of the box and drilled a low shot to the far post, but Player was equal to it and tipped it around for a Bitton corner. Bitton sent all bar two forward but the corner was eventually hooked up field by Longwell’s 10.

McCormick out muscled Kyle Curtis to race clear of the half way line with the ball, leaving only the keeper to beat. The keeper rushed out to the edge of the box to try and close the gap but McCormick kept his cool and side footed the ball over the keeper into the top corner of an open net.

The relief from the Longwell bench was immense and every player barring the keeper pilled on top of the substitute striker. This 1-0 win puts Longwell on 16 points from 23 games, two point above Bitton and 4 above the relegation zone.

My MotM was Bitton’s Jamie Gregory who put in a solid performance at right back. He was beaten to the ball a few times in the first half but kept to his defensive duties well and with more games under his belt he should become a real asset to his club.

Best of luck to both teams this season in their quest to move away from the bottom 2. It won’t be long until Orchard started scoring and his goals should see Bitton move up the league and if Longwell can work on their possession in midfield they will surprise a few teams in this league.

*Apologies for the lack of names in the report, hastily written on the day without a team sheet. Tried waiting for the teams to appear on the league website but they are not in number order. If either club want to message in their team’s for the day it would be greatly appreciated! Thanks Bitton!*