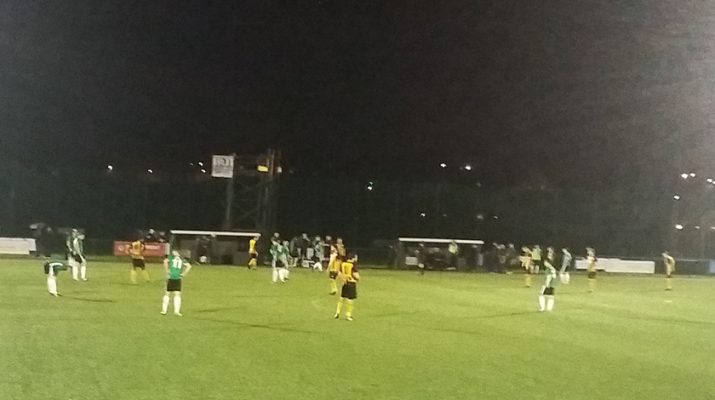 2nd played host to 1st in the Western League Division One in a highly contested game.

Both teams needed a win to improve their early season title hopes and it was Westbury who came flying out of the traps. A deep cross from the right made it to the back post but Cameron Shorney miskicked his clearance and played in Westbury’s number Jamie Jordan* who controlled the ball and squared it past Matthew Dunk for number Dan Kovacs to finish from 2 yards out.

This mistake, in the second minute, didn’t phase the young full back as Keynsham looked to play out to Shorney frequently in the first half.  Keynsham soon rattled the woodwork after ten minutes with James Batchelor’s cross evading everyone but the crossbar.

The game was levelled on the 30 minute mark with a spectacular goal from Matthew Long. Shorney provided a deep cross into Matthew Brown who headed down to Long who jinxed past two defender to fire home from the edge of the box.

Westbury grew into the half and J Jordan found space in the box after a pull back from their striker. However his shot lacked composer and flew wide past a stranded Dunk.

Dunk was soon busy pulling off one of the only saves of the game for both keepers as the Keynsham number 1 got down well to parry a long shot from Westbury’s Steve Hulbert.

So at half time the teams when in even but the yellow cards started to come for consistent fouling and talking back to the referee.

The game was so stop start in the second half do to the tight nature of the game and an increasingly card happy ref that there was little in the way of chances for both teams.

There was one strange moment when Westbury’s Josh Ferguson received his second yellow of the game for simulation on 53 minutes. After a freekick awarded to Westbury, Keynsham’s James Batchelor stepped back next to the full back and then suddenly Ferguson was on the floor ‘out cold’. The referee came over and ordered the physio on and consulted the well placed linesman who confirmed that he was pretending to be hurt.

Sure enough he was back up to his feet and immediately received his second yellow and a red card. It was an absolutely bizarre situation as Westbury already had the advantage and had started to really come into the game.

The Westbury management had nullified the treat of Shorney on the right and could cope with Nathan Curnock’s advances on the left. Once Ferguson was off though Keynsham’s main attack was on the left but the Westbury defence coped well with Brown and Craig Wilson; not allowing the strikers any time on the ball.

Keynsham didn’t have any answer to a fired up Westbury side and the Ks were lucky to keep 11 men on the pitch themselves. Wilson had been booked early in the second half and then kicked the ball away after the whistle had gone later in the game but the referee waved the Westbury protests away. Although a few moments left Brown received a yellow for playing on after the whistle.

Dunk had to still be on his toes and made a brave save after being left short by his defence. The Ks left a slow moving ball for Dunk and he dived in bravely at the feet of the Westbury striker and got clattered in a dangerous challenge, which saw another yellow produced.

In the end the experience of the league leaders told and they kept Keynsham at bay to see out the game with a draw.

I can’t really say anything more about the game due to all of the stoppages. The referee definitely had a hard game to control and got the majority of the major decisions correct but should have stamped his authority on the game earlier and been more consistent. The young ref will learn from this and improve as this standard of football is a testing ground for up and coming referees and I’m sure he will get feedback and an analysis on this game.

Keynsham look like a side who are almost the complete package for this league, however the inability to see out this game with a win against 10 men may be the difference in their promotion push. There needs to be a little bit more hold up play up front and the wingers or full backs need to be getting to the byline.

Westbury’s Ricky Hulbert would have been a good addition to this improving team as he held the line well for Westbury and caused the Keynsham defence problems all night.

The management at Westbury will be going home happy at their team’s performance but will have to address some of the needless yellow cards. Their full back who was sent off looked like a decent player at this level and will be missed when suspended, and may find a spell on the bench when available again.

Best of luck to both teams for the rest of the season, it’s going to be a close battle at the top!

*Massive thank you to Greg Coulson for providing the Westbury team, I thought I recognised Ricky Hulbert from his Bath City days:

Leon Greenland should’ve started at LB but due to his injury Jordan Pinder swapped to LB and Mark Robinson (who is normally a striker) moved to RB, which brought Josh Ferguson in on the wing.