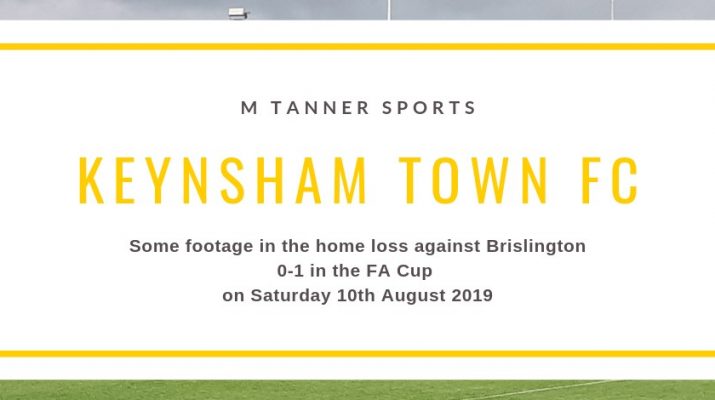 Keynsham are knocked out of the FA Cup at the first stage as they went down to a 3rd minute goal against local rivals Brislington.

The action was soon underway as three minutes in when Brislington counters, after a move breaks down on the right side for Keynsham. An interchange between Oaklan Buck and Craig Parsons allows the latter to round the keeper. Ash Clark narrowed the angle but Parson’s shot beats the covering defender who couldn’t keep it out at the near post.

Brislington were looking dangerous with their pace up front as they look to counter. Keynsham had good possession but couldn’t find their edge in the final third as the half went on.

There was a great chance for Brislington as Buck hits the post on the half an hour mark. Mitchell Greenslade dinks a long ball forward on the right which evades Scott Saunders with Buck meeting the on rushing Clarke; but the first time lob hits the post and out for a goal kick.

Two minutes later a short corner from Harley Purnell finds Saunders who drills in a fierce shot but the keeper saves for a corner.

Buck continued to prove a handful as the half was drawing to a close wit another couple of half chances going wide.

Ks started quickly but it was Brislington’s Mason Dager who tests Clark first.

Keynsham new boy Ben Harris (back for a second spell) registered a shot on target which was held a few minutes later. Matt Curnock fires in a shot but it’s held again around fifty five minutes, as Keynsham start the half with real purpose.

Adrian Harvey hits the bar midway through the half from a corner.

Brislington are soaking up the pressure well but Keynsham reduced them even more this half with fewer counter attacks.

Harris cuts back in field from the left and finds space to shoot but its over around eighty three minutes.

Keynsham then hit the bar again with just a few minutes left, but it wasn’t to be.

Brislington did enough to hold on to put their name in the hat for the next round of the FA Cup, bagging some welcomed prize money in the process. On this showing it looks like John Allen has recruited well in the summer and it will only be a matter of time before his side starts to convert possession in to goals.

Best of luck to Brislington in the next round and I’m looking forward to watching the two league games this season.

If you want to see more action from the game then be sure to check out and subscribe to the M Tanner Sports YouTube Channel:

27th January 2014 marktanner87 Comments Off on Keynsham Town vs Corsham