“We have had a great season on the field so far but there is still work to be done,” said club chairman Richard Evans. “The Badgers have been consistently brilliant but are now firmly concentrating on winning every game from here on in. The Bats are improving every week but know that getting to the play offs will be a fight.”

This was the message before the Bats and Badgers played host to St Austell Claycutters in Cornwall and Blue Sox in Leicester respectively.

The Bristol Badgers secured the BBF AA Central Division title on Sunday 15th July on the back of two grand slams.

Vil Katinas and Nerius Tamosiunas both hit their maiden grand slams as the Badgers beat the Blue Sox 30-6 and 20-5 in Leicester to reach the end of season national play offs.

Katinas drove in six runs during the first match of the double header as the Badgers scored 17 runs in the second innings with Rich Green, Jamie Prout and Tom Knox also making their mark from the batters box.

It was more of the same in the second game, with pitcher Deivydas Trinkunas hitting a home run as well as being strong on the mound, striking out five Leicester batters

The heat took its toll on the umpire who was taken ill at the beginning of the second game. Bristol Badger Rhian Theaker took over umpiring duties for the rest of the match.

“The Badgers thoroughly deserve to be division champions in their first year in the BBF and will now be preparing for the playoff games against teams from the south of England,” said Richard Evans, chairman of the club.

First year players made a big impact in the Bats 38-12 victory over the St Austell Claycutters on Sunday 22nd July.

Jon Brownhill, Adam Weavers, Josh Williams-Trim and Charlie Taylor got 10 hits and scored nine runs between them as the Bats piled on the runs from the start.

“It was an important game for us and meant that we have kept pressure on the Muskets at the top of the conference,” said Bats manager, Keith Weinberg. “All the guys who are playing their first season played really well and their hard work at training is paying off.”

The Badgers travel to Stourbridge to take on the Titans.

Support is very much welcomed and encouraged down at Somerdale.

Best of luck to both The Bats and The Badgers! 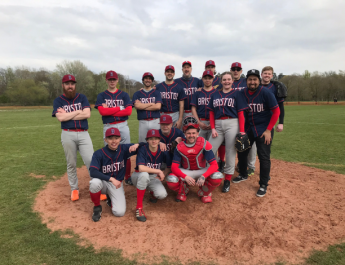