There is just one round of games still to play, on 3rd September, and the winners of this year’s Summer League has already been decided following the 13th round of matches on Monday 20th August.

Ursa Major were only able to field 2 players for their match against current leaders Nietzsches Nightmares and their heavy 8-1 defeat means that Nietzsches Nightmares cannot now be caught at the top of the table. Steve Doidge and John Turner were both unbeaten for the leaders while John Hunter got the consolation point for Ursa Major.

Second placed Batheaston Braves suffered their worst result of the campaign going down 6-3 to Keep Paddling who fielded only 2 players.

Nigel Pedley and Clive Beese beat all 3 of their opponents and this result has left Batheaston Braves now needing a good result in the last round to hang on to second spot.

Another battling performance from Keynsham TT Club against Mendip Lambs who fought to the end means that the Keynsham team made up ground on Batheaston Braves and remained just ahead of the chasing pack in 3rd place.

Keynsham were without their captain Mark Tanner so this was a creditable result for the inexperienced Keynsham trio none of whom have played in a competitive league before now.

Oldfield scored an excellent 6-3 win against a strong Dawns Divas team. Ian Dagger has been playing well recently and his maximum was the decisive contribution. He was well supported by veterans Paul Harris and Colin Dowding.

While the League winners have now been determined the battle for 2nd spot goes to the last round of matches with 5 clubs still in with a shout of runners up spot.

If you want to get back to playing table tennis or try it for the first time in a social environment then there are a few handy guides from earlier this year: 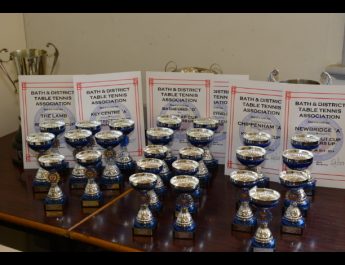