M Tanner Sports were fortunate enough to be able to witness Aberystwyth’s first European game at Park Avenue in 10 years; first ever in the Europa League format. This game didn’t quite go to plan, with Aber looking to dish out some pay back from losing 4-0 with ten men in the away leg. The 5-0 loss says it all really, the officials from Aber have written their own match report, which is kinder than the one which would have gone on here!

The build up to Europe was fantastic in the town, pretty much straight away after the Welsh Cup final loss.

Preparation is the same as usual apart from just having 3 weeks off. We’re back working hard already and I’m sure no one would have it any other way. – Bari Morgan

So the squad has been working hard in the build up and the town centre has been showing their support for the Aber boys with good luck messages. Even just walking off the train and seeing the noisy Derry City fans in the Weatherspoons at the station you could sense a carnival type atmosphere straight away with both sets of fans enjoying themselves after the game. Nearly every spare bed was taken in Aber for the game, which would have been a nice boost to the economy that suffered in the winter at the hands of the storm that put Aber on the map for all the wrong reasons.

Now it’ll be the management team’s job to pick the boys up and get them focused on getting the club back in Europa League action next season to ensure that club isn’t just a one season wonder. It was a crushing day for all involved with the club, not just the players. The likes of Thomas Crockett, Chris Howells, James Edwards and many more proud locals (who put in 100s of hours of voluntary hours over the course of a season) will also have to dig deep and keep the club going over the next months to ensure the players have everything they need to get back to European competition. 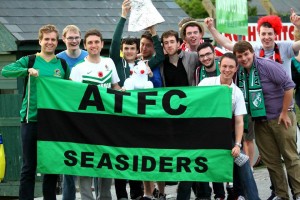 There is much more that can be said about this European outing, but at least Aberystwyth Town FC are back on the map. It’s now a big task for the 2014/15 season to keep them in the public eye with many Man U fans hoping they’ll fail!

Over the course of this coming season there will be occasional Welsh Premier Football articles, but if you (the readers) want more then please get in touch and we’ll try and feature your club more.

A rare perfect day in football