The first piece of action in the game came just after just 5 minutes. The Larkhall keeper failed to get the ball under control from a wild backpass and was soon punished by young City striker Jordan Ricketts; dispossessing the panicking goal keeper and passing the ball in to the empty net. 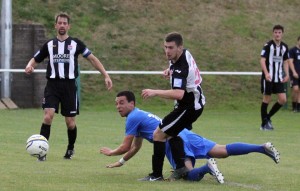 Bath’s keeper, Sam Butler, made a number of outstanding saves in the first half but his real moment of glory came when he faced a penalty given for handball. He dived to his left and made a great save to keep Baths lead! Bath were the ones who ended the half on top, with new signing Frankie Artus hitting the crossbar with a long shot after weaving his way through the Larkhall defence.

The second half started a lot slower than the first with neither side being able to create a good chance and get a hold on the game. Substitute Dan Bowman made some dangerous runs down the right wing but none of the crosses leading to any good chances. Eventually, after 71 minutes the ball found its way to David Pratt in the box; who managed to face goal and get a shot away. The deflected ball was a stretch too far for the Larkhall keeper who, despite his efforts, could only watch the shot roll past him into his bottom right hand corner.

There were not too many more chances created in the last 20 minutes for either side as the game came to an end. Bath City can come away satisfied after kicking off their 2014-15 season preparations with a 2-0 victory again an ambitious Larkhall side.

Thanks for the match report Liam and best of luck to Larkhall in their first season in the Southern League Div One. There are bound to be a few City fans making a trip down to Plain Ham if they can’t go away to watch City.

The photo is from Mark Stillman Football Photography, find it on FB