The other major contender for the Men’s Open is Paul Drinkhall who, if you follow table tennis, needs no introduction. Paul has played at the highest level for a number of years now and has narrowly missed out on Young Sports Personality of the Year award in the past. Drinkhall became only the second English player (after Carl Prean), to win a tournament on the ITTF World Tour Open circuit; winning the Spanish Open in April 2014. So he goes into this Open full of confidence and very kindly took time out whilst travelling back from a training camp to answer our 5 Questions:

1) The groups have been drawn and you are up against David Wetherill, Owe Karlsson and Adam Nutland, have you played against any of them before? Do you fancy you chances of progressing a lot further in this tournament?

I probably have played against these players in my career but I don’t remember all of my matches, I will be focused for every match and I think I can go a long way in the tournament!

2) This is one of the last chances to prepare before the Commonwealths, along with the England vs Australia Test Match (20th July). How will these two events differ? and will it tell you more about the team going into the Commonwealths?

I hope I can perform well at both of these events leading into Glasgow, for me they are a good warm up to a big tournament but however they go I think as a team in Glasgow we can come back with a lot of medals. 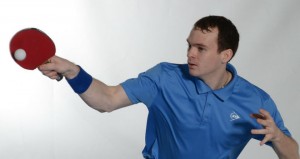 3) Yourself and Liam Picthford are considered favourites for this Open, but you are on other sides of the draw, who else will be considered contenders?

Yes me and Liam are the top seeds but there is a big group of players that are capable of winning the tournament so it will be a great tournament!

4) Which up and coming players should we look out for in the Under 21s this year?

There are a few up and coming players but I just hope it is an English player that can become champion, Tom Jarvis is one to watch!

5) Finally, how important is it for the sport that BT Sports have got involved in televising the latter stages?

It is great that BT sport are getting involved, I really think the more coverage Table Tennis can get the more people will want to see it! It would be great if the National Championships could get some coverage too!

Thanks for taking the time to answer these Paul and best of luck with the Open and preparation leading up to the Commonwealth Games.