The current men’s Champion Liam Pitchford has completed his Five Questions Interview. Liam is one of the favourites for the tournament this time round as he has become England’s number one in such a short space of time; and he’s still only 20!

1) The groups have been drawn and you’re up against John Murphy, Billy Ho and Mario Michaelides. Have you played any of them before?

No not that I can remember, I know John Murphy because he’s played for Ireland so I know what to look out for from him but I don’t really know the others.

2) You won this tournament last year, does that put extra pressure on you? or do you enjoy the expectation of being the man to beat this year?

It does put a bit of pressure on me because everyone expects me to win but I’m used to it now, it was the same at the English nationals this year and I came through that. Obviously this tournament will be more difficult with all the English guys and some top foreign players coming over, so I’m looking forward to the challenge. 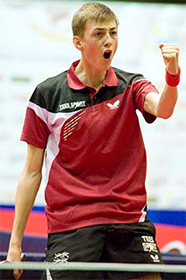 3) This year there seems to be a really strong line up with players looking ahead to the Commonwealths and some with a point to prove. Who are the other top players to look out for?

Yeah it’s going to be a great tournament that will lead up nicely to the commonwealths. There are a lot of great players in the draw that are all capable of pulling off some great wins, you’ve obviously got Paul Drinkhall who has been playing some great stuff recently then you’ve got the foreign players Pattantyus, Salifou, Kosowski, Stoyanov who are all top players. It should be a great spectacle for the people who come to watch.

4) Having made the step up a few years ago from the under 21’s, which players are coming through at the moment that will look to break into England’s top ten?

Well technically I’m still U21 but who’s counting haha I haven’t seen a lot from the younger players recently but Sam Walker is already in the top 10 and has produced some good results. I was really impressed with Tom Jarvis when I played him at the nationals this year, he can be one to watch in the future!

5) Finally, with BT Sports covering the latter stages of the tournament do you think the sport is slowing getting the coverage it needs?

I hope so I really do, I think these tournaments are a great way to get more publicity for table tennis and I’d like to say a big thanks to Steve Pound for having the vision and drive to organise it and make it such a great turn out.

Best of luck to Liam who has a very bright future in the game. Liam will be competing in the Test match against Australia on the 20th July in his final competitive action until the Commonwealth Games.