Main message for the board of directors after meet the manager, Mon 4th Aug.

After a sleep on the coach on the way back from Concord to Bath I’ve finally decided to make some notes on what I’ve just witnessed. Now a 3-0 loss to an Essex side on the coast is an away trip that takes you away from your family or loved ones for the whole day, it must seem mad to those who don’t follow football, but not to us. See we are that type of supporter that sees their team through thick and thin, through any division, the highs and the lows; talking their team up to any Premier league shirt wearing ‘fan’.

So as you can guess this isn’t going to be any old match report, giving you a breakdown of the facts and figures over the full 90 minutes of the latest Bath City game. That report would look at should they have played 5 at the back, Bowman’s pace over Simpson’s experience, why was Artus on the bench and what a difference Walsh would have made. Instead this report will comment on the day as a non-league fan to the start to well… when you wake up on the motorway home. 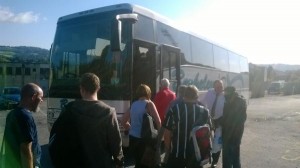 Away days start early, a lot earlier than normal. You look forward to go a week or so in advance once you have booked your seat on the coach or train. Then the week before you go it builds up, you find you are bringing it up in conversations at work or socially. People think you are mad to go all that way for a non-league match, but you only think about what it will feel like when your team scores and the buzz on the terraces when the ball hits the back of the net.

Then the actual day starts early too, at the crack of dawn you are up getting your shirt on and making your packed lunch (well we’re not made of money). A short trip to your home ground and you’re standing around talking to your friends and peers about how your team is doing this season and can they really make the play offs with this team or that tactic.

The coach pulls up and even though there is space for everyone on board you still find yourself rushing to the door. You say hello to everyone; to those familiar faces of who you can’t quite remember all of the names. You roll out of the car park and off through the city centre where people literally stop and stare at a coach stuck in traffic in the middle town. I never understood why people do that, maybe they can’t believe so many Bath City fans exist. At least they will talk about the club if only for a few minutes of their day.

Then once on the motorway people are still chatting about the teams, line ups and tactics; with monies being collected and 50/50 tickets being sold. Now this must be nothing like peoples preconceptions of what goes on during an away trip. When people think of football fans travelling away they think of rowdy behaviour, smoking, drinking and spoiling for a fight but official travel really is a great way to meet like-minded people and bring the kids with you. On this particular trip the air con broke and leaked all over 5-6 people on the right hand side of the coach. This was sorted out at the services at around the half-way point to Essex.

However this wasn’t done by a repairman but instead by a club director armed with just a butter knife (to get the screws off the roof panel). After a 45 minute botch job with a towel to get rid of the excess water (and many photos), we were off again. Now no one can say that director doesn’t put 100% into the club, he is also known to change bulbs on the floodlights on occasion as well as sinking his hard earned money into the club. So next time you have a chance to speak to a director then just say thank you for all their efforts; at non-league level you’ll bump into them nearly every week!

So we arrived in Canvey Island at around 1pm and arrived at Concord Rangers’ ground shortly afterwards. Now most grounds at this level are out of town or in industrial estates but this one was different being by the sea. It was on the edge of a caravan park, an apt setting of the newly names Vanarama South League. The clubhouse was small but functional with a warm welcome, with some locals/reserve players playing pool and lifting the table after every game to avoid paying the 50p charge. The club house now had the changing rooms attached in a smart new build with a media centre as Concord kick off their second season at this level.

Concord have invested well on and off the pitch as an Andy Watkins shot in the second half was the only real chance on target to lift the hopes of the 100 or so City fans that made the long trip (oh Concord won 3-0 with a goal from open play after 9mins and two penalties). Another consolation was the prices and the food, it was just £10 for adults to get in what is the right price for this level of football. Whilst £1.50 bought you a mountain of chips, just a shame they don’t get bigger crowds as it’s great value for money throughout the club. Another plus point was that there were no ‘big time’ stewards breathing down your neck that you can get at some other clubs, so the array of City flags could be hung up without any fuss.

Needless to say the fans travelling by coach didn’t stick around past ten past 5 and we were back on the road. There has been some excellent media coverage of a forgettable day for Bath City fans but one of great optimism for those supporting Concord. There are links at the end of the article to some pieces and here is the highlights for you to enjoy or despair at again:

So to conclude this account of what it’s like to be a travelling non-league fan, it was definitely worth the trip and expense of going to the other side of the country. You get the chance to put names to faces on the coach and have the chance to have reasonable debates of issues surrounding your club, which you don’t get if you’re a keyboard warrior on forums or on social media. It’s also opportunity to blow off steam and show pride in where you come from and be proud of your team.

And well there is always Tuesday night to put the result right…..