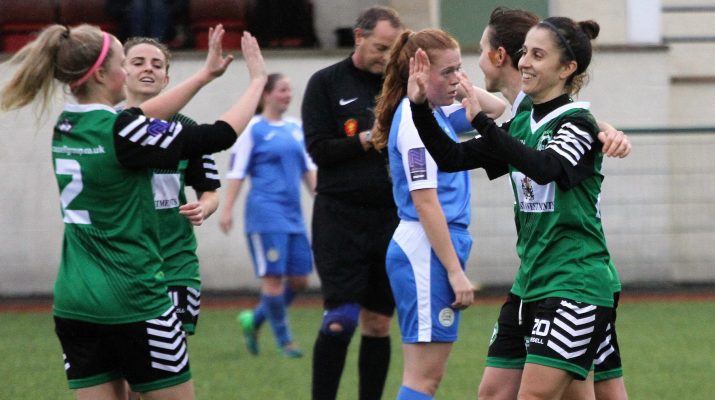 Even first ten minutes with Keynsham going close from two corners and a Kaka shot which was well held. Basildon had an effort saved early and April Sykes shoots wide as both teams try to get a foot hold in the game.

There was the first of two big refereeing decisions on 13 minutes. Basildon’s Holly Turner charges into Charlotte Haynes as the keeper came out and had two hands on the ball. Play was stopped for a few minutes as both players received treatment, with a yellow card being produced for the Basildon number 9. 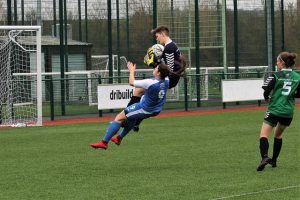 A moment later Keynsham took the lead through Laura Williams. There was a crossed ball finding Williams on the edge of the box. The winger tried to play it through to the strikers, but the ball hits a defender and bounces back to her. This time she takes on her marker and goes past her to finish at the near post.

The advantage went to Keynsham as they started to assert some attacking pressure on the visitors. On 21 minutes it was 2-0 after Justine Lorton was released on the left. The experienced striker pulls it back to Williams who touches it to Kerry Bartlett for a tap in.

Lorton almost got on the score sheet a few minutes later, gaining space from a Kaka through ball, but Sophie Rhodes was there to block.

Just over the half an hour mark and Keynsham score again. Williams fought hard to win the ball back and she plays in Bartlett. Keynsham’s number 9 touches it away from her marker to finish well into the far post.

Chelsea Hinz, in goal for Basildon, saves well from Kaka after the midfielder was played in by Lorton.

Basildon did manage to pull a goal back five minutes before the break to close the gap to 3-1. Turner lead the counter attack on the right, with Keynsham exposed from a set piece. Turner’s cross was palmed by Haynes but Sykes reacted quickest at the far post to stroke the ball home.

The woodwork came to Basildon’s rescue with little over five minutes of the second half played. Ellis Hillman‘s corner is half cleared but the full back manages to latch back onto the ball to unleash a strike at goal, which crashes of off the corner of the goal frame.

This was just a taste of the attacking intent from the home side as they quickly added to their advantage.

Williams was played through on the left to get one on one. However with her vision she squares it to the arriving Lorton to tap home with an easy finish; 5-1. 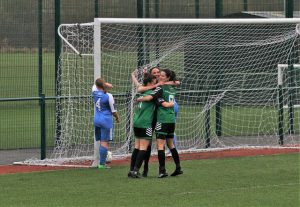 Kaka made a surging run on the right taking on a couple of defenders. She loses out at the by-line but keeps the pressure on the clearance. It resulted in a half clearance for Bartlett to pick up at the edge of the box, scoring with a fantastic lob shot over the keeper; 6-1.

Lorton gets played in by Ellie Curson on the left. She cuts inside with the vision to find Kaka in the box, Kaka’s first touch takes her away from goal but she then recovers, on the turn, to fire past the keeper; 7-1.

Patient build up on the left between Corinne Yorston, Lorton and Williams, resulting in Yorston crossing at the near with Hillman nipping into touch it past the keeper. This made it 8-1 in a dominant 16 minute spell mid way through the second half and allowed Keynsham to rotate their squad.

To the visitors credit they didn’t give up and kept looking for a way to get into the game. Their hard work paid off in the closing stages with two goals.

Maddie Thomas‘ corner was headed home by number 18 with around fifteen minutes left to play.

Before the last goal there was a second big call for the officials. There was a 50/50 ball outside of the area with Hinz and Hillman colliding, as both players had committed in winning the ball. The referee deemed this a foul by Hillman so the Keynsham player was shown a yellow card.

Then with about five minutes left Basildon restored some pride with their third goal of the afternoon. Keynsham had some hesitant defending from a cross from the right, this allowed Thomas to touch it down and finish.

This win put Keynsham into the next round of the cup and they have been drawn against Fylde Ladies at home. The game will be played at the AJN Stadium on Sunday 6th January. Basildon will go back to Essex and their league campaign in their bid to stay up in the Southern Premier Division.

Best of luck to both teams in their next games!