Billy has recently taken over the player/manager role at Bath Futsal Club; although due to a serious injury this role will be more of a manager this season. He is extremely busy working hard to sort out his team but we’ve managed to track him down for a little catch up.

Other sports: Only football

1 – You’re currently injured, what type of injury and how long before your return?
I recently suffered from a dislocated ankle and fractured Tibia, the injury happened in a Football training session. If everything goes to plan then I should be back into full training by Christmas time and then looking to play once I feel 100%. From the injury I have learned not to over train as I was training with Uni of Bath Football Club, UoB Futsal Club, Bath Futsal Club and Glastonbury Football club, hard lesson to learn but has opened up other opportunities within sport, which I will come onto later!

2 – You’ve just become manager and have one game under your belt, how has the transition been?
The transition has been difficult as I look to create a new philosophy following on from Michael Wootten’s good work. The club has a strong structure to build upon, with sponsorships, development squads and media in place already. Coaching is a passion of mine and took this opportunity as a chance to learn the game further and progress Bath Futsal Club to the next level. With my connections in Futsal I believe I can build a squad ready for next season, I see my current coach at University of Bath, Sion Kitson, as a mentor as he had managed for a number of years in the National League division one, Super League and also captains Wales, and was in my position as a coach from a young age. I am also looking to create a connection with University of Bath Futsal Club providing the pathway to National League for the Performance players. 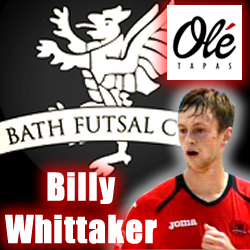 3 – Man management is the hardest aspect of managing any team, how have the squad taken to you so far and will there be anymore signings?
Before coaching Bath Futsal Club I was a player for them so the players already there knew my personality. The first training session I set out how we are going to play for the rest of the season. With my background in futsal, playing in the National League Division one and Super League, also currently on the University of Bath Futsal Performance Programme for the last couple of years, I want to transfer my knowledge to the players, it is important that I continue as a coach to learn and educate myself, to enable the squad to continue to learn and educate the squad. There has been recent signings, mainly players from the university of Bath Futsal programme who will provide squad depth, and competition to the current players at the club. I want to create a fun but competitive atmosphere at the club. This starts at training and it is important that the National League Squad train together which sometime has not been the case due to work commitments . I’m constantly looking out for players from the local area, Futsal 5s league and to see if they have the potential to play Futsal. Expect signings to be announced in the next few weeks!

Also, in November Bath Futsal Club will have a U19s team who will look to feed the first team, my ambition for the club is to have an academy in place, and for the club to start competing with the top clubs in the country, this is the long-term vision of myself, and the owner, Mike.

Many thanks Billy, Bath Futsal Club have also announced this week that they will holding two open sessions for anyone who wants to have a go at the fast paced sport. So the sessions are on  Friday the 31st Oct and 7th Nov at Hayesfield School at 8pm for an hour at just £3!