Last season Abbie Milwain was an up and coming youngster after winning the Band 1 Women’s title on the National GP Table Tennis circuit. This season she has kicked on again winning one Premier GP title and finishing well in the other two. On Saturday 15th November the GP comes to Bristol but the finely balanced Women’s Premier starts on the Sunday.

“I’ve been playing well in the GPS I’ve done so far, so I am looking forward to going, I know lots of people are entering so the standard will be very high, but I am happy with how I am playing in training at the moment but a lot of it will be down to how I play on the day!” Says a very modest Abbie Milwain when asked about how confident she is following her 2nd placed finish at the last GP; in South Shields. “I know a lot of top players are entering like Emma (Vickers), Karina (Le Fevre), Alice (Loveridge) and more. Getting to play them is always good as you can test yourself against the higher ranked players, and if I play well there’s always a chance of a good win!” 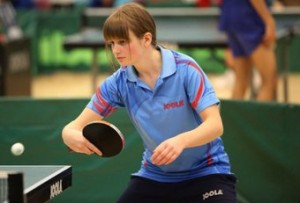 However Abbie herself has risen to 8th place in the senior English women ranking, two places higher than at the start of the GPs back in August. So she is in a great position to improve her rankings further with another good performance and the facilities her in Bristol are similar to her home town. “I have played Bristol GP quite a few times, last year I won band 1 there. I like the conditions and they’re fairly similar to where I train in Derby.”

When asked which match she was most looking forward to seeing, if she could put any two players together, the answer was easy. “I would say Ryan Jenkins and Chris Doran, Chris is at the top of this years GP standings and Ryan won last year so it will be interesting to see who would win.” This tournament will be Ryan’s first in the GPs this season so it’ll be great to see how the Welshman gets on this season having entered it late.

Abbie is currently in her 3rd and final year at Keele University studying physiotherapy but still has a lot to look forward to this year. “I will also be playing Notts GP (6th/7th Dec), which is very near to home so should be good. Then Senior British league Div 1, which is a really good standard and I get to play the men which is always different to playing women!”

So Christmas is an after thought in her mind as she gears up for a busy two months and we wish her all the best in Bristol!