The first goal came early when Sam Higgins deep cross from the right was straight on to the head of Phil Walsh, who scorers on his return from injury just 9 minutes in. Shortly after Frankie Artus has a free-kick that hits the wall after a foul on Walsh; the resulting Ashley Kington corner falling for Walsh but Steve Phillips saves well at his near post. City looked to have the better of the opening exchanges moving the ball about well.

However the 16th minute saw the injured youngster Sam Kamara come off for Louis Perry. Walsh then went close but for Phillips to deny him again with his long throw releasing Dave Stone on the right. Young City keeper, Josh Barrington, slipped coming out to meet the striker on the edge of the box but the defence were quick to close down the chance as the Shepton frontman looked to pass.

Shepton started to come into the game after that chance. Kalin Gould was allowed to shoot after the space was created by Stone’s pass on the right with the striker starting to get the better of young full back Ryan Bole. Stone switched flanks up front as the half went on and carved out a chance on the left, squeezing it between two defenders, but it was an easy catch for Barrington.

Barrington also saved well later from James Billing’s close range effort after a cross from the byline as Shepton look to get back into the tie.

The half comes to a close with Gould testing Barrington from range but again the young keeper positioned himself well. Stone was shown the first yellow card of the game right on the stroke of half time for diving; with Bath the happier of the two sides at the break.

Half time sub for City with Chris Allen getting a much needed 45 minutes for Artus, as both players looked to gain more match practice ready for the next league game on Saturday.

Bath had the first real chance of the second half with Higgins’ long range effort soaring past the post ten minutes into the second half as both teams look to try and take control of the half in the early stages.

It was Shepton who made the break through however on the 57th minute with a wonder strike from distance from Stone. Gould carried the break-away attack, selling a couple of City defenders short, and feeding Stone who unleashes a great strike from 25 yards beating Barrington at full stretch much to the delight of the strong travelling support to make it 1-1.

Elliot Gibbons instantly responds with a powerful looping shot which was well tipped over by Phillips as the game starts to come alive. Shepton break again with Gould and Stone but Gould’s touch fails him in the box for Barrington to gather easily.

Shepton now look to make a change to try their luck on the counter with the tiring Dave Thorne coming off on 60 minutes for James Vincent.

Kington sees his well struck free-kick go wide of the post as City still look to try and dominate the game by creating space, but Shepton are now keeping the ball better and starting to get forward more.

Sub on 70th minute for Shepton with Craig Loxton being replaced by Jordan Townsley.

It was Bath that score next as they go 2-1 up through Nick McCootie on the 74th minute. A corner was picked up on the edge of the box with a low drive back through a number of bodies with McCootie flicking it past Phillips. Phillips was then booked for his language in the aftermath of the goal, the experienced shot stopper was clearly unhappy with something in the build-up. 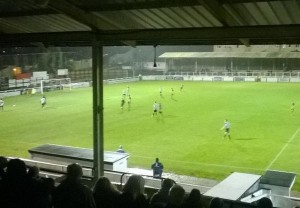 Final sub for City in the same minute is Walsh for James Stinson, after a great shift up front for City.

Stinson got on the end of a Kington through ball to force a decent stop from Harry Paice who ran with him to clear for a corner. The resulting corner came back out to Kington who floated the ball in but again the young forward Stinson couldn’t quite connect with Phillips catching easily.

The 86th minute saw Stone leaving the field for Brett Cotterill in the closing stages for Shepton’s final substitution to give the youngster some valuable game time against higher opposition.

If there was ever going to be a cup twist it came right on the 90th minute with a last gasp free-kick taken by Ben Cleverley. It was lifted into the box from the centre circle with everyone in the box for it; but the strike from a Shepton player wasn’t a good one and it went wide of Barrington’s goal with City progressing to the Quarter finals.

MOTM – Bath’s Ashley Kington – in amongst the Shepton players not giving them time to settle and dictating most of City’s attacking play.