Bristol Rovers Fan’s View
Away with the Gas, Telford and players form

Rovers picked up another win, this time against Telford. The game ended 1-0 to Rovers with the goal coming from midfielder Ollie Clarke.

Again, work commitments prevented me from attending the game but my sources have informed me that it wasn’t the prettiest match, even going as far as to say it was a scrappy affair with a clear lack of good football. However, as I’ve said before, a win is a win!

Will Puddy started in goal for a Rovers as Steve Mildenhall was unwell. The former Salisbury City player kept his first clean sheet for Rovers and I’m pleased for him. He was unlucky not to keep a clean sheet against Dover at home and he has proved he’s a worthy replacement if needed to cover. Some bad news from Saturday’s game was that Andy Monkhouse was sent off for an alleged elbow. Rovers appealed the sending of but the appeal failed, meaning Monkhouse will now have to sit out the next 3 games. Trotman also went off injured and it looks as though his injury will keep him out for a while. I’m gutted for him! He’s been solid at the back and will certainly be missed over the next few weeks.

Jamie White scored for the reserves in the week in their game against Exeter so hopefully he will be given a chance to start soon. If he stays injury free I’m sure he will score some goals for us as he has done over the last few seasons in the conference for Salisbury.

In the same game, impressive youngster Jamie Lucas scored having returned from being on loan at local club Weston Super Mare. He’s scored lots of goals for Weston in the league below so maybe he should be given the chance to do the same at this level? Perhaps Darrell Clarke will want to send him out to another team to gain more experience starting games and scoring goals.

Hopefully Rovers can go on another run and close the gap on runaway leaders Barnet who we play at home in a few weeks time. Rovers are currently 1 point off of second place and 10 behind Martin Allen’s team. The game against Barnet is a massive one so let’s hope we get a decent crowd in and get the 3 points we need. 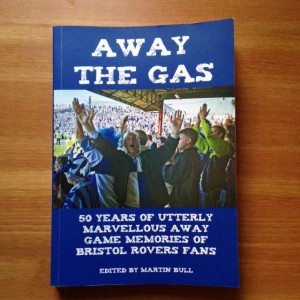 At the end of last week I received a book titled ‘Away the Gas‘. Written by Rovers fan Martin Bull, the book pieces together fan’s stories, memories and photos of Bristol Rovers Away days, creating an amazing account of some of the team’s most memorable away matches. I was lucky enough to share some of my memories with Martin and I am so impressed with the finished book. Not only does it make a great read  but 10% of the money made will be going to the brain tumour charity in memory of Nathanael Hornby, a huge Rovers fan who sadly passed away. With Christmas coming up this is a great gift idea for any Rovers fan.
Well done Martin – what a great idea and what a book!