What a fantastic festive period for Rovers, just what every gas head would have wished for! 3 great wins – against Gateshead in front of the BT cameras, Torquay away on a damp Boxing Day and the demolition of Macclesfield!

Rovers beat an impressive Gateshead side 3-2 and luckily the game was live on BT sport. I had to watch the game on the TV as I couldn’t get back in time for the game.

Rovers were…well, let’s not be harsh, but they were awful in the first 20 minutes. We made Gateshead look like Barcelona the way they were spreading the ball around. Gateshead took the lead which didn’t come as a surprise as they had so much of the ball. Clarke was forced into an early change subbing Angelo Balanta for Ollie Clarke. Rovers went into half time 1 down.

To be honest I was dreading the second half, but how wrong was I! Rovers looked a different side –  Clarke scoring from outside the box with a great strike in the 59th minute was the changing point for Rovers. However, within a few minutes Rovers were behind again with Gateshead scoring on the counter attack.

Rovers piled on the pressure and Andy Monkhouse was brought down on the edge of the area, up stepped Lee Mansell with the free kick and bang! Goal! What a free kick! 3 minutes later Rovers took the lead thanks to the ever impressive Stuart Sinclair with a great finish after good work from Matty Taylor. What a great turn around! The game ended 3-2 to Rovers and what a way to gain 3 points! What a game for the TV audience who watched the game on BT sport.

Family commitments prevented me making the trip down to Torquay, although I was glued to Twitter checking the match information on the official Rovers Twitter. We had just been for a nice walk in the Lacock fields when Rovers took the lead through Matty Taylor. What a great strike! As we got back to the house it was 2-0 to rovers with Neil Trotman heading home Jake Gosling’s corner.

Torquay soon had a goal back when the Rovers goalkeeper punched the ball into his own net. I feel sorry for the lad but luckily for him Rovers went on to win the game! From what I’ve read Rovers should have had a lot more goals, but 3 points is 3 points! What a nice present for Rovers fans!

On Sunday, Rovers were up against Maccelsfield at the Mem – the last game of 2014.

The game ended 4-0 to Rovers and what a great win! The first goal came from Andy Monkhouse who headed home from a corner towards the end of the first half and Rovers went into the break 1 up. In the 65th minute Monkhouse was at the heart of the action again, beating a few men in the box and playing a great pass which was met by Nathan Blissett who guided it home. 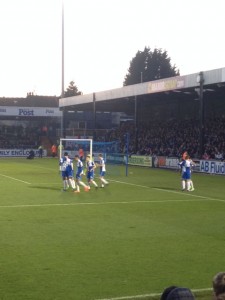 Rovers were 3 goals up when they won a free kick, which was  dispatched by Lee Mansell and met by the head of Matty Taylor! The fourth and final goal came from the penalty spot with Ellis Harrison smashing it home! The penalty came after substitute Bradley Goldberg was brought down inside the box.

Rovers could have had a few more goals but to win 4-0 against a promotion chasing team is awesome! You could see the players grow in confidence as the game went on and they were all fighting for the ball. Hopefully this result will stand us in good stead for next year as we chase Barnet for top of the league and the ultimate goal – promotion back to where this great club should be!

Barnet drew on Sunday so the gap is now 7 points, can we catch them?

Barnet, we’re coming for you!