Fran is a busy man at Bath Futsal Club! He is the club’s sponsorship officer and goalkeeper for their local league futsal side. Having only joined the club back in the summer of 2014 after an impressive pre-season, his aim for the season is to compete in the national league after adapting to Futsal well. 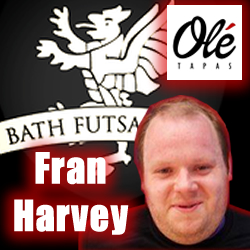 Position: Goalkeeper
Debut game: Yet to feature in the national league
Age: 28
Past clubs: Devizes & Aces in Bath
Other sports: Have run a few marathons and enjoy playing out door six a side twice a week