Saturday 17th Jan saw Rovers take on Surrey club Woking. This was the game I looked out for when the fixtures were made as I work not too far from Woking and have a few work mates who go every week to support the Cards.

For me this is a nice easy trip from my home in Surbiton with it only being a short train ride or drive. I took along my fiancé Daniela for the trip. I don’t think she was too keen as the weather forecast didn’t look great and she had heard Woking didn’t have a roof on the away terrace. I tried to reassure her it would be ok and to take a coat! She didn’t see the funny side of this, but after cooking her breakfast and doing the hovering she agreed to come.

We left quite early and headed down the A3 towards Woking. We decided we would park at the station as we had arranged to meet my work mates at a pub nearby, and to pay £2 to park all day is a win!

We met at a really lovely pub called The Sovereigns – the staff were welcoming and it had a great atmosphere. As an added bonus they served Winter Lightning – one of my favourite ales from the Hopback Brewery. What a nice pint! It’s not your typical football pub and it was mostly full of people enjoying a pint over lunch, but this soon changed as more and more Rovers fans made their way in.

After a few beers we made the short walk down towards the ground where we said our goodbyes to my work mates and went our separate ways.

We decided to go in the stand behind the goal and Danni was pleased that she got to sit down and had a roof over her head. To be honest, the stand is pretty decent and would not look out of place at a football league ground, although it looks quite odd within the Woking ground as the other stands are awful – like old chicken sheds! 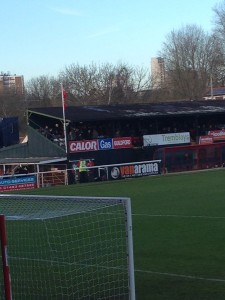 More and more Rovers fans came pouring into the ground and it soon got to the point where they had to stop letting them in, meaning some Rovers fans were left outside and missed the game. I feel for the fans that were unable to watch the game – perhaps Woking should have been better organised? But what a turn out for Rovers, yet again the support is top class! My work makes complimented the Rovers fans saying they couldn’t quite believe how many turned up.

League leaders Barnet were in action at lunchtime against Grimsby with the game ending 3-1 to Grimsby. This meant Rovers could cut the gap from 6 points to 3 points with a win at Woking. 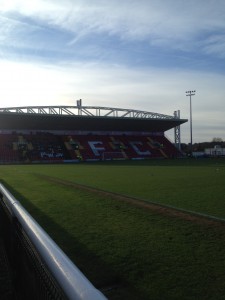 The game kicked off and Rovers started shooting towards the impressive stand I mentioned earlier. Through out the whole game neither keeper really had anything to do as both defences stood firm and defended well. Matty Taylor thought he had put Rovers 1 up on the stroke of half time, only to see the linesman’s flag up. I think he was on side as did every one else, and Taylor’s reaction showed he thought so too. Rovers goalie Will Puddy had a fairly quiet first half and was only really called into action when a Woking player hit a shot which took a deflection and Puddy easily gathered. At half time it was nil nil.

The second half was much the same as the first half with both defences playing well. Taylor again thought he had put Rovers ahead but again the linesman’s flag was up. Soon it was time for new signing Jermaine Easter to make his debut in the blue and white quarters. The striker, who signed in the week from championship side Millwall, showed some good touches and control. Hopefully in the coming weeks he will become a massive player for us. On paper this is a huge signing – well done Darrel Clarke and the board for bringing him in. Hopefully this is a reflection of intent to get out of the league. 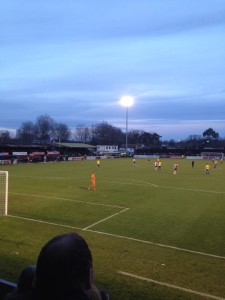 The game ended 0-0 and to be honest, other than the lack of excitement in the game, I’m not too disappointed. Woking are a good team and solid at the back – they’re not up near the play offs for nothing. For Rovers to keep a clean sheet away from home is great, and our defence were solid yet again. Maybe if Stuart Sinclair had been fit it might have been a different story as we seemed to lack a bit of the pace in the centre. With Barnet loosing, the gap is now down to 5 points!!!

Rovers have no game this week as Braintree are still in the FA trophy so the game has been postponed. What’s everyone going to do with another Saturday without the mighty Gas?

I’m off to Madrid for the weekend and I’m really looking forward to it. The only downside is we’ve missed the chance to catch a game out there – Real are playing away and Athelitco are playing when we fly back. Gutted!

Hope everyone has a great weekend!

Thanks for another great piece Wayne! If any Rovers fans want to take in a local game then Bath City are at home in the FA Trophy this Saturday ko 3pm against Altrincham. Family ticket deals are available at the club office before ko:

Your support is most welcome as Bath look to get into the last 8 of the competition!