Football under the lights this Friday

Keynsham Town are looking to break their record attendance this Friday night (6th) when they take on Western League strugglers Roman Glass St George. KO is at 8pm on Friday so that it doesn’t clash with any other games in a bid to get more people out of the house and down the AJN Stadium at Crown Fields.

152 is their highest attendance this season but Club Secretary Julian French is confident they can get better than that this weekend. “We have moved our Toolstation Western League Division One home game against Roman Glass St George to Friday 6th February (kick off 8:00pm) in the hope of attracting more supporters. Junior players of the club will have free entry with a paying adult and we hope many will take up this chance to watch the first team”

The price is just £6 for adults and £3 for concessions and members of the armed forces get free entry for every Western League home game. There is a full stocked main club house with BT Sports and a selection of hot food and drink available. Smart Computers, based in Keynsham high street, are the club’s main sponsor and there is a small committee which works tirelessly behind the scenes to keep the club going.

There is a thriving youth set up at the club with all the age groups being coached by FA qualified coaches. Already this season many teenagers have made the step up to experience life in the first team with Liam Robson, Lewis Sealy and Matt Curnock playing an important role in the clubs fortunes.

At this level of football many teams pay their players but at Keynsham they can’t afford to pay. So every player crossing that white line on match day does it for the love of playing football for their manager and team mates.

The players really appreciate the support of a large crowd cheering them on so please get down if you can. 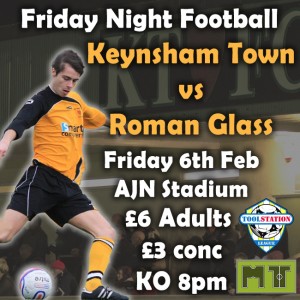