Bath City’s wonderful FA Trophy run ended in desperate disappointment when they lost to North Ferriby United on penalties at Grange Lane. With the second leg of the semi-final ending all square at 1-1 after extra time, and the overall tie deadlocked at 3-3 on aggregate, the Yorkshire side prevailed by 4 goals to 2 in the dreaded shoot out to break West Country hearts.

The game began perfectly for the visitors when, after only 2 minutes, Sekani Simpson’s cross from the right was headed firmly into the far corner of the net by Nick McCootie. Thereafter, the home side enjoyed the better of proceedings and commenced an aerial interrogation of City’s defence that continued throughout.

Parity was almost restored on 4 minutes when a cross from the right was headed powerfully towards the bottom corner by giant centre forward Tom Denton, only for Jason Mellor to make a stunning diving dive at the foot of his far post.

Strong United penalty appeals were waved away by the referee, Mr. David Webb, in the 13th minute when Denton went to ground with Phil Walsh appearing to pull his shirt. There was certainly much jostling inside the box but Mr. Webb, who was in a good position, clearly thought that both parties were equally guilty.

City were struggling to retain possession as the hosts continued their airborne assault on goal, but the defence was holding firm under pressure. In the 20th minute, a long free kick into the box was flicked on by Denton, and Mellor was required to save Ryan Kendall’s looping header.

The Somerset side fully broke the shackles after 22 minutes when Dave Pratt robbed Gregg Anderson out on the right touchline and advanced into the box. He weaved his way past several challenges, but scuffed his eventual shot that was hurriedly cleared to safety.

On 28 minutes, Chas Hemmings delivered a free kick into the home box towards Dan Ball, who was clattered by Ferriby keeper Adam Nicklin. The custodian was nowhere near the ball but, once again, Mr. Webb declined the opportunity to point to the spot.

Bath had a golden chance to increase their lead when Pratt’s through ball presented McCootie with a clear run at goal but, unfortunately for the striker, he inexplicably lost his footing and fell to ground in a scene bearing some resemblance to Devon Loch in the 1956 Grand National.

Seven minutes before the break City had a double let off. Kendall cut inside from the left and forced Mellor into an excellent block and, when the ball eventually fell back to the forward, the keeper made a breathtaking diving save to tip his goalbound shot over the bar.

McCootie found some space in the United box in the 41st minute, but he succeeded only in scooping his shot over the bar.

The final action of the half saw Jason St. Juste’s cross from the left headed against the post by Denton with Mellor beaten, and City were the more relieved of the sides to reach the sanctuary of the changing rooms.

The second period commenced in much the same vein with The Villagers continuing with their direct tactics. Danny Clarke’s shot on 53 minutes deflected off a defender and straight to Denton in front of goal, but he was unable to exert enough power on his header to beat Mellor. Kendall then worked his way into the City area on the hour mark, only to lift his shot well over the crossbar from a promising position.

The breakthrough arrived for the home side in the 64th minute when Walsh was adjudged to have held Denton under another towering right wing cross. Skipper Liam King took full advantage by sending Mellor the wrong way with his spot kick, and parity was once again restored.

Lee Howells replaced McCootie with Andy Watkins as his side looked to stem the tide, but North Ferriby continued to look the more likely to add to the scoreline.

Denton’s half volley from 18 yards was so wayward that it cleared at least 25 plots in the allotments behind Mellor’s goal, but United came close to taking the lead after 71 minutes. King’s shot took a wicked deflection, and the wrong-footed Mellor pulled off a miraculous save to tip the ball over the bar. Denton headed over from the resulting corner.

Ross Stearn came on for Dan Bowman, but the pressure still remained on the City defence. Russell Fry’s free kick from 20 yards curled just wide of the upright and, on 80 minutes, St. Juste’s low angled shot was well saved at the near post by Mellor.

Andy Gallinagh tried his luck from distance seven minutes from time, but his shot narrowly cleared the crossbar and, at the other end, the captain was forced to clear the ball off the line after Mellor had done brilliantly to get his fingertips to Denton’s fierce cross-shot.

As full time approached, City suddenly began to pose a threat up front as The Villagers appeared to tire. Firstly, Ben Adelsbury dragged his shot wide of the far post from a good position and, when Pratt picked out Watkins’ run with a measured through ball, the substitute was unable to keep his effort down. The full time whistle sounded shortly afterwards to signal the need for an additional 30 minutes.

The first attack of extra time saw Nathan Jarman race clear down the inside right channel but his shot was wide of the near post. Denton then somehow contrived to slice wide of an open goal from 4 yards out following a St. Juste cross, but his blushes were spaced by an offside flag.

City began to come more into the game and, on 97 minutes, Simpson’s cross found Stearn on the edge of the area, and his hooked volley was held under the bar by Nicklin. The visitors were then handed the initiative when Fry was shown a second yellow card for a trip on Watkins, who was looking to break forward.

Adelsbury gathered the ball out wide on the left in the 103rd minute and drove purposefully into the box, but his eventual shot was blocked at the near post.

As the sides changed ends for the final time, City looked to capitalize on their numerical advantage, but it was the hosts who posed the first threat. A free kick into the box was poked into the outside of the side netting by Anderson, with a number of the home supporters mistakenly heralding another goal.

Pratt did remarkably well to earn a throw in on the left flank and, when the ball was played to Stearn on the edge of the area, his ferocious drive was cleared off the line by Danny Hone with more than a suspicion of handball. Crucially, Mr. Webb was unimpressed with the penalty appeals, and the hosts survived.

Watkins cross from the left on 115 minutes found Adelsbury, only for the midfielder’s header to be comfortably plucked out of the air by Nicklin.

Ashley Kington replaced Hemmings with three minutes left on the clock, but the hosts had the next attempt at goal when Jarman’s angled volley flew straight at Mellor.

City had one more opportunity to avoid the lottery of penalties when they won a free kick wide on the left. Stearn tried to catch out Nicklin with a curled effort that cleared the angle of post and crossbar.

The final whistle sounded shortly afterwards and the teams prepared themselves for the spot kick finale. Pratt and Stearn both had their kicks saved by Nicklin, but King and Jarman beat Mellor with ease. Despite Kington and Frankie Artus converting, firstly Matt Wilson and then St. Juste sealed the West Country side’s fate and secured a visit to Wembley for North Ferriby.

This was a cruel way for City’s fantastic FA Trophy adventure to come to an end, but it cannot be denied that United held the upper hand for the majority of this encounter. Bath were unable to stem the tide during the second half of normal time and when the equaliser arrived, unfortunate as it was, it had been threatening for some time. The overriding factor is that the crushing disappointment of the eventual defeat must not be allowed to overshadow the heroics and brilliance of this cup run.

There is an old saying that ‘It’s grim up north’, and it would be difficult to persuade anyone of City persuasion otherwise after events at Grange Lane.

Editor’s comment – There was a great gesture by Ferriby’s number 7 Danny Clarke at the end of the game as he wished City fan’s a safe journey home. Most of the home fans were also a credit to their club before and after the game, all the best to North Ferriby in the final on March 29th. 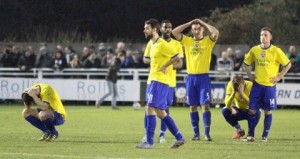