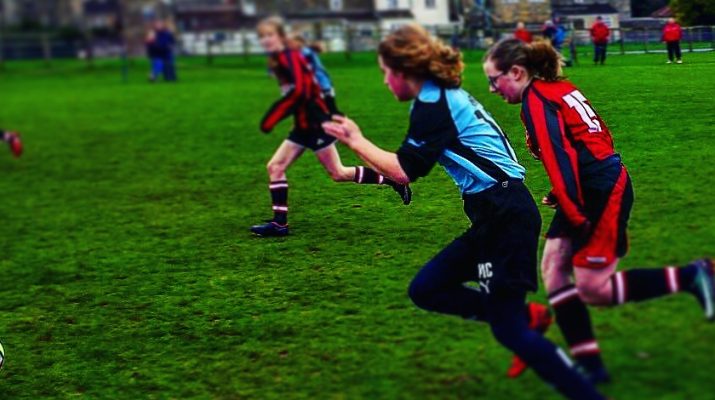 With the lyrics of the 1974 hit from the Chi Lites drifting into my head, this match was ‘too good to be forgotten’. To place this in context, on Saturday October 1st 2016, Warminster hammered us 8-3. On that day, Charlotte CD, Orla, Lizzie, Maddie, Ellie, Jemima G, Jemima M, Elana and Hannah played their hearts out on a boggy pitch.

This time around all but Hannah played them again but with the additional stalwart defenders of Nicole and Charlotte D, and the tenacious running and tackling of Emma in midfield. In other words, this would be the next litmus test of the teams development.

We started with a back three of Orla, Jemima M and Charlotte D. This is starting to become, along with Nicole, Maddie and Amelia, our settled back line. The midfield saw Ellie on the right, Lizzie in the middle and Maddie to the left. Elana went up front with Emma playing of her shoulder. It was a great start. A strong and swirling wind added an element of uncertainty to high balls and throw ins and it took a few minutes for the play to settle.

When it did, it didn’t take long for Elana, running hard to feed off some lovely passing from Emma and Lizzie, to slot the ball in for our first goal. Over the course of the next 10-15 minutes we had good control of the game. A couple of changes midway saw some straight swaps of Nicole on for Charlotte D, who once again is showing great speed and timing in defence – from both feet, and Jemima G for Maddie, who had bust a gut chasing back and pushing forward in her less familiar midfield position.

Strong, stubborn but thoughtful defending kept our goal safe though we had a real scare when a high looping ball from outside of our box looked in all certainty to drop just under the bar but Charlotte CD was wise to the danger and tipped it over. Corners were a scare first half as the wind pushed the ball goal ward and it was from a clearance of ours that Warminster had a shot from outside the box. Ellie, in trying to clear it, caught the side of it and the direction change left Charlotte CD stranded. Ellies cries of sorry could be heard in Bristol, so mortified she was by the own goal.

Did she let it get to her – not Ellie. She worked even harder and at half time she came off still apologising despite having put in one of her best performances of the season. Half time team talk from Ed and a couple changes to the line up from me and we set off in the second half confident and expectant. Emma came off at half time and I moved Jemima GT up front in support of Elana, while Maddie came back on in midfield to fill the gap left by Jemima GT. At the back, Orla came off having played a pivotal role in our strong back three once again to be replaced by Charlotte D.

We had the wind in our favour second half and Charlotte CD was able to get some big kicks in which put their midfield and defence under quite some pressure.

As with Emma and Elana in the first half, Jemima GT and Elana were quick to see the runs and with Maddie, Lizzie and Ellie providing, and consciously looking, for the quick penetrating ball forward it didn’t take long for both Jemima GT and Elana to get opportunities to score. Some close shaves, some sky bound shots and quite a few shots straight at the goalkeeper kept us from scoring – for a while. But eventually, they came and today it was happy hunting for Elana. Running off their back three, she was able to twist and turn and run past her markers; her second, a lovely shot to the bottom left off a perfectly weighted pass from Lizzie that sliced their defence in two.

At 2- 1 up we were looking good for the win but conscious it would only take one mistake to change the game. Warminster fought back well and we had to endure a few goal mouth scrambles mid half as the pressure grew. With 18 minutes to go, we made our last changes of the match. Orla came back on for Nicole (who once again had provided resolute defence) and I finally brought Ellie off to some high fives with Emma re-joining the fray in midfield.

These last 18 minutes saw a burst of energy from Jemima GT positively pounding down the left and Emma storming down the right. This stretched their defence and with Maddie and Lizzie getting tighter in midfield, they were able to exploit the space.

The third goal was a run down the right from Emma, a lovely cross and, with a little control of the ball, Elana slots in her third. With 11 minutes to go, the fight seemed to drain out of Warminster. We saw in our front five today much of the stuff we do at training; Lots of movement, creating space, passing to feet, incisive passing, but also a lot of heads up thinking. It was great to watch.

So whistle blown, Girl of the Match decided for their team and another WIN.

Everyone, once again played their part. When I write these reports I don’t set out to mention something about all the girls but inevitably all the girls always force my attention by their commitment, enjoyment, burgeoning skills on the ball and in the head and now, as the season has progressed, their belief in themselves and their team mates around them.

Today, oddly, I haven’t mentioned Jemima M, our Captain for the match. As usual, she was at every breakdown in defence and so calm. A good team score lots of goals but a great team in my opinion, lets few in. So cue a little statistical analysis. We build from the back. Our back line is getting stronger and stronger (and the stats show it) with Jemima M commanding the centre.

Its not just one player however, its the group of players; Charlotte CD, Orla, Nicole, Charlotte D, Maddie, Amelia and Jemima M. We conceded 51 goals in 10 matches before Christmas. Since Christmas we have conceded 6 in 5 matches. We mustn’t forget that our goal scoring has also improved substantially: 9 goals from 10 matches before Christmas to 13 goals from 5 since but without that massive reduction in goals conceded, we would still have been incurring some frustrating defeats. So well done to our defence as well.