Conference South Round Up
Games from Sat 18th April 2015

Bromley clinched the Vanarama South title with one game still to play after an impressive 3-0 win against Weston-Super-Mare.

A bumper crowd of 2,938 saw Bromley take a lead in the 28th minute when Joe Anderson’s direct ball into the box was partially cleared. Bradley Goldberg helped it back in and Reece Prestedge beat Luke Purnell to settle home nerves. Quickly after it was 2-0 with Prestedge turning provider, setting up Moses Ademola, who finished first time with a swerving shot from the outside of his right boot. Victory – and the title – was confirmed on the hour mark when, after Purnell saved from Ademola, with Goldberg slipping the loose ball to Jamie Slabber who volleyed home.

A season’s best crowd of 525 saw Danny Mills give the Hawks a 29th minute lead before it was doubled by Scott Neilson a minute later. The Tudors, who also have come close to achieving a top five spot themselves in their first season at this level, settled after that and ten minutes later reduced the deficit through Luke Allen. A Sam Deering penalty won the game and fifth spot for the hosts.

Only three points separate the four teams guaranteed a play-off place. So who plays who and where will be decided by next week’s games in which Havant and Whitehawk play each other at Westleigh Park, whilst Wood visit Chelmsford and Basingstoke host Weston.

Havant fought out a goalless stalemate against Basingstoke at the Camrose. Both teams had already guaranteed their place in the play-offs, neither side looked too interested in a disappointing encounter.

Gosport’s play-off dreams disintegrated, despite a last-gasp 1-0 win over Bishop’s Stortford. Mike Carter’s last-gasp strike was one of the only efforts of real note in a non-important game for either side.

Concord Ranger’s play-off hopes also ended in disappointing fashion as they fell to a 1-0 loss against ten-man Hayes & Yeading. The Beachboys had been in with a chance of a top-five place after a superb 2015 saw them close on the league’s front-runners; they went into the game knowing only a win was likely to be enough to keep them in the hunt. However, it was Hayes who started the brightest, they scored what proved to be the only goal of the game with their very first effort after 14 minutes. An out-swinging corner from Luke Williams was met by Christian Smith at the near post and his bullet header beat home – and on-loan Arsenal – keeper Josh Vickers. Ten minutes before the interval Hayes’ Greg Morgan was dismissed after aiming a head-butt at Beachboys defender Danny Glozier. Despite the sending off the visitors held on to the spoil the hosts’ day and grab all three points.

Maidenhead United are currently third-bottom after Hayes’ win and their 4-1 defeat by Wealdstone. A decent crowd of 562 saw Shaun Lucien give the Stones an early seventh minute lead that Jacob Erskine cancelled out after 20 minutes. But Jonny Wright restored Wealdstone’s lead ten minutes after the break and then Matt Ball added a third on 66 minutes with rounding off the win with a fourth Jefferson Louis with ten minutes remaining.

Already-relegated Farnborough shared a goalless draw at Priory Lane against Eastbourne Borough, while St Albans City’s hot property, Jack Green, fired them to victory against Ebbsfleet at Clarence Park. The 17-year-old scored the only goal of the game – his first for the club – in the 22nd minute as the Saints picked up the points.

Bath City fell to a disappointing 2-0 loss at home to Sutton and M Tanner Sports reporter Kevin Porter was at the game:

Bath City’s hopes of concluding their home Vanarama Conference South programme with victory were dealt a massive blow when they were reduced to ten men inside the first thirty seconds. The hosts belied their numerical advantage for large periods of the game, but eventually lost to Sutton United, who registered a goal in each half.

On a glorious sunny afternoon at Twerton Park, the match commenced in dramatic fashion as, almost immediately, Chris Allen felled Damian Scannell with a high tackle in front of the away bench. Whilst the challenge of the City midfielder was undoubtedly ill advised, there is no doubt that the fouled player made the most of the situation. With the overreaction of the Sutton management and players, who swarmed round the referee, Mr. Ryan Atkin of Farnborough, the red card was an inevitable outcome.

Despite this early setback, the home side had a good opportunity to take the lead in the 3rd minute.  A long ball over the United defence was chased down by Dave Pratt, who lifted his shot over the advancing Aaron Howe but wide of the target.

It was Bath who were enjoying the majority of possession, but Sutton forged in front after 15 minutes following a corner from the right. The ball fell to Micky Spillane beyond the far post, and his looping volley found its way into the far corner of the net after eluding Mellor’s outstretched arm.

City tried to respond immediately, but Ashley Kington dragged a shot well wide from 25 yards. At the other end, Spillane found space in the area, and Mellor made an excellent diving save to push his shot round the far post.

The ensuing exchanges were fairly even, but Mr. Atkins was beginning to frustrate the home players and supporters alike with a series of baffling decisions. There was generally a paucity of goalmouth action, but Theophanous turned smartly inside the City box on the half hour mark, only to shoot straight at Mellor.

The next flashpoint occurred with 39 minutes on the clock as City launched an attack. Nick McCootie’s forward run was crudely blocked by Glen Southam on the halfway line and, as the pair tangled, the City man appeared to be struck in the back. In the meantime, the ball found its way to Naby Diallo who was in a promising position out wide on the left. With the fracas continuing in midfield, and now involving a number of players, the referee halted play and consulted both his assistants. To the complete incredulity of the home contingent, Mr. Atkin eventually decided to take no penal action whatsoever, marched in military style across the pitch, ball in hand, and restarted the match with a drop-ball on the left flank that, predictably, saw Sutton clear their lines.

McCootie was clearly incensed by his treatment and, having been cautioned for a late challenge on the edge of the United box, he was fortunate that he made no connection with a raised foot shortly afterwards. As a result, Lee Howells took the sensible option in replacing him with Andy Watkins ahead of the second half resumption.

City continued to play the better football after the break and had a golden chance to equalize in the 56th minute. Pratt did brilliantly to force his way through several challenges and push the ball past the goalkeeper but, with the goal at his mercy, he struck his shot against the outside of the upright.

The previously stricken Scannell shot over Mellor’s bar from 18 yards and, Spillane fired well wide from distance, but it was Bath who continued to pose the greater threat. Kington’s corner from the left on the hour mark picked out Pratt, but his header was plucked out of the air by Howe. Two minutes later, Howe failed to reach an Artus corner kick, and Phil Walsh’s header was cleared of the line by a defender to save the keeper’s blushes. Artus was then too high with a rising drive from 25 yards.

The home side had an escape in the 66th minute when a long clearance from Howe bounced into the path of Craig Dundas, who fired wildly wide from inside the area.

Dan Bowman and Ross Stearn replaced Andy Gallinagh and Naby Diallo respectively on 68 minutes, but the hosts were visibly, and understandably, beginning to tire. Sutton gradually took advantage of the situation and were now able to pose more danger upfront. Southam found himself in space in the City box, but contrived to blaze his effort so high over the bar that it flew out of the ground.

Mellor produced another good save to turn Ricky Wellard’s shot behind, and Shaun Cooper was just too high with his header from the resulting corner. However, Sutton struck a decisive blow on 84 minutes, when Dan Fitchett was allowed too much room on the edge of the box, and he found the bottom corner of the net with his low shot.

Although City gave a good account of themselves and cannot be faulted for their effort, the loss of Allen so early in proceedings was ultimately too great an obstacle to overcome. For their part, Sutton will feel that theirs was a job well done and, in the end, their win was fairly comfortable.However, the main talking point will be the ‘man in the middle’ for whom it is hard to find words to adequately describe his performance. Certainly, ‘inept’ and ‘woeful’ are hopelessly wide of the mark.

Hope you have enjoyed this double report, just one week left of the Conference South season to go now. Have a good week in the sunshine #keepactive 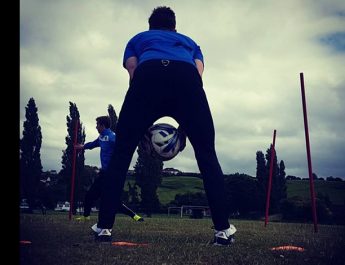