Waitrose Bath have organised a football match against Waitrose Keynsham just over a year after their last charity football match. This year’s event is taking place at Twerton Park on Sunday 30th August, ko 6.30pm.

The two local stores will be raising money for the Big Bath City Bid. This is the community group that hope to raise enough money to turn Bath City FC into a community run club. The membership model proposed is not too dissimilar to the Partnership model that Waitrose operate under; with the one member one vote rule.

It will also make Bath City sustainable for years to come as they won’t be relying on big money backers. Instead their future will be determined by how many fans they have getting behind the scheme. The club will then connect with more people through more community work and projects. 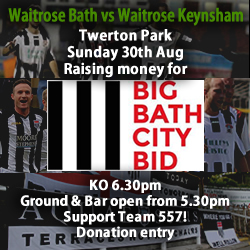 Last August the two stores played a match on Keynsham Town’s AJN Stadium and raised money for the Kelston Road Football Project. Bath took an early 2-0 goal lead by the teams went in level at half time, with Keynsham winning the game 5-3. This year Bath are looking to seek revenge and are predicted to do well on home turf with the crowd behind them.

The players are all paying for the privilege of playing on one of the best grounds in the South West and it’s free for people to watch; with the left over money from the pitch hire going to the Bid. There will be a donation bucket behind the bar for those to wish to contribute any spare change to the cause, with the club bar open from 5.30pm-10pm.

It promises to be an entertaining evening of football with some questionable skill levels on show. Come on down and show your support for both teams and back the Bid!

A report of last year’s game can be found here