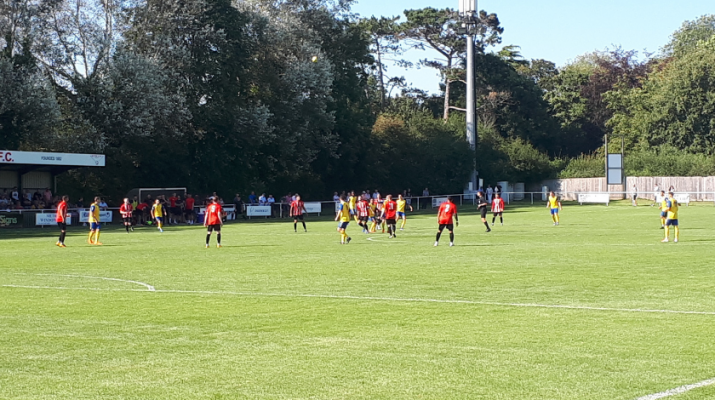 It didn’t take much longer than a minute for Mangotsfield to go ahead in this FA Cup tie. Bitton lose possession in the middle of the park with Mangotsfield breaking with Daniel Demkiv who feeds Ashley McGrane but his chance is blocked away. Then the follow up shot hits the post and is scrambled out in the 6 yard box finding Demkiv to finish well.

Eight minutes in and Mangotsfield break again with Thomas Hillman away in a smart 1-2 but opts to shoot, rather than use Lee Hartshorn who was square to him, but it goes wide.

Ten minutes later and Hartshorn nearly get a touch on McGrane’s long range effort after a succession of chances for Mangotsfield. A minute later Josh Egan has a dipping volley from Ibrahim Diallo‘s through ball for Bitton but it goes over.

The score was level on thirty five minutes through Egan. Aysa Corrick breaks on the left and, after some neat interplay, manages to drill a pass across goal to Matt Groves who finds Egan with a tap in.

This gave the home side confidence and they went 2-1 up just six minutes later.  A deep cross finds Corrick on the left who holds off his marker to control the ball, turns smartly to finish at the near post.

Mangotsfield with the early chance of the half with a free kick but Hillman puts it over the cross bar. Shortly afterwards 15 goes close but for a smart save by Bitton’s keeper. The shot came through a crowd of bodies after an Hillman freekick

All Mangotsfield 15 mins to the half but Bitton force a save when Corrick  finds Dean Griffiths with a smart switch of play, his well struck shot was saved at the near post.

This pressure finally told around the sixty fifth minute. Demkiv was fed through and plays in number Matthew Tanner but the shot is blocked well by the keeper. It falls in the box to Hillman who controls and puts it away.

Not long afterwards a long ball by the keeper finds Hartshorn on the right. He beats two men to set up Hillman but his shot sails over.

The telling goal for Mangotsfield came with just two minutes left on the clock for 2-3. A Free kick on the left is delivered well with Ben Brooks heading home to put Mangos into the next round.

From the restart Mangotsfield’s number 1 had to be alert to save well with Bitton committing numbers forward. However it was too little too late as Mangotsfield proved too much in the second half – but it was an excellent game of football with both teams set to do well this season!