Gary Owers and Jim Rollo have had a very busy February so far without their team even kicking a ball! Changes were going to happen to the first team squad when Owers took over the reigns at the start of the month and he’s wasted no time in getting in players.

William Murphy was the first to arrive on loan from Bristol City. The under 21 captain will stay for the whole of February to help his development and add some battling qualities to the midfield. Experienced Matt Taylor was next to sign on for the remainder of the season following his release from League Two Newport County. Taking on some coaching duties the former Team Bath defender will use his 200 game Football League knowledge to help tighten up a leaky City backline.

The newest signing was announced today as Liam Kelly joins the club on loan for a month from Championship side Reading. Having played for the Republic of Ireland under 17 and 19 squads the City faithful will be hoping the midfielder gets freekick duties and licence to roam forward:

All three players are expected to be in the squad for the trip to Sutton tomorrow (13th Feb 2016) as City look for a positive start under Owers. There is a large coach running to this game, please check on the Forum link here for details.

However with new signings some players and staff have had to make way. John Freegard has left the coaching staff this month after giving over 10 years of service to the club as an attacking coach. Former City player Freegard is a very popular figure at the club after being brought back to Bath as a coach by former manager John Relish and it is hoped he will be back down to the watch this new Bath City team in action.

From the playing side Ben Adelsbury and Matthew Coupe have both left. Truro’s manager had made his feelings very public at the start of the month of his desire to resign Adelsbury. To the player’s credit he didn’t respond in the media and trained with City right up until their match with Truro (which was called off). He moves to them for an undisclosed fee after playing for the Romans for three years making 86 appearances and scoring 9 goals.

Matthew Coupe today announced that he has retired from football to concentrate on his business commitments. The 36 year old resigned for the Romans amidst an injury crisis to the back four at the beginning of the season. He was a natural leader at the back and made a large contribution to the fantastic start to the season; even scored the winning goal against Maidenhead on his 300th start. The tough tackling defender finishes his career on 336 appearances, scoring 8 goals and a few red cards…

So as mentioned City are away at Sutton this Saturday in a 3pm ko. If you’ve never been to an away game this would be an excellent one to start with so make sure you book the coach as there are some rail works being done this weekend. The next home game for the Romans is on Saturday 20th against St Albans (3pm ko) and it’s their Community Day, hope to see you there! 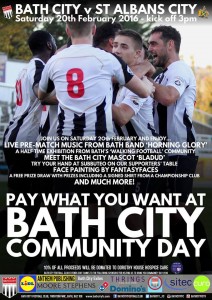