Well that wasn’t easy, nothing is with City this season! City conceded in the 91st minute from former striker Scott Wilson but then up steps Tyler Harvey who scores a penalty in the 93rd minute and then a 45 yard screamer to win it just a minute later.

These moments are so rare and special in football and ones which keep fans coming back week in week out to cheer on their local team. 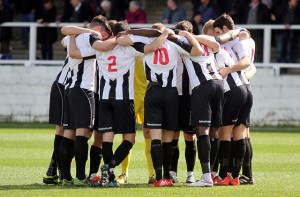 It’s hard to put the rest of the game’s action into words due to the sheer emotion in the final 5 mins.  There is a massive temptation to just write yyyyyyeaaaaahhhhhhh yes yes yes, get in there Cityyyy Boyyyyyyyysss. But that would be unprofessional right?

I thought both teams looked nervous throughout the 90 minutes and played very much within themselves. Neither side wanted to make a mistake in a game where the stakes are so high. A loss for either team would leave them in the relegation places come 5pm but a draw would probably see both of them in there too.

There were a lot of needless fouls in the first half which didn’t help either team establish sustained periods of pressure. Weston looked to play a quick counter attacking game which exposed a slow City midfield. Both teams had penalty appeals turned down in the first half as the referee tried to give defenders the benefit of the doubt throughout the match.

It was Weston who finished the half the stronger of the two side as they broke forward well just before half time; with Steve Phillips having to organise his back line constantly. In the second there was more of the same as Weston started to express themselves as the game wore on. Having said that City continued to have the majority of possession in midfield but couldn’t quite deliver the ball well enough to Nick McCootie and Dave Pratt up front.

The turning point in the game came just after City’s first shot of the game from distance by Frankie Artus on 64 minutes. Pratt was played through a minute later only for Clayton Fortune to block the shot, but in doing so picked up an injury. This forced Ryan Northmore to make a change to Weston’s formation with Joe McClennan coming on for the visitors with keeper Luke Purnell being used more as a sweeper.

Up to that point City played neat and tidy football in and around the box but failed to produce any chances of note; with Weston’s back four and keeper snuffing out the danger. Now though Weston’s emphasis was on attack and distribution to the pacey frontmen was quicker as a result with Weston looking for the much needed win.

Then in the 91st minute this happened:

This is the reason why you should never ever leave a match early no matter how desperate the scoreline is! It was easily one of my best ten moments whilst watching City. Fans on the internet forum have recently discussed how much of an impact Gary Owers has had in this second spell taking charge. This grit and determination shown in this game should have won over a good number of City supporters who had almost given up on this season.

Two goal Tyler Harvey was also interviewed after the game:

So with just six games to go City are currently sitting in 18th place just 3 points above the relegation places; with Weston in 21st place now four points adrift. City next travel to Chelmsford who are two points and two places ahead of them on Saturday 2nd April.

I’d like to just take a minute to sympathise with the Weston supporters and their keeper Purnell. It was an absolutely gutting feeling when they took the lead and it looked like City would end the day in the relegation places. I’m going to have to use the old cliché and say that Weston looked too good to go down. However their captain Kane Ingram let them down when he got sent off; saving a sure goal.

I know a point wasn’t any use for either side but he will now be missing for 3 of their remaining 7 games. This is a massive blow for a club low on confidence. Luke Purnell and Scott Wilson were both devastated after the game with Purnell not moving from the pitch for a good 20 minutes after the final whistle. Any team can beat anyone in this league though, as Owers said in the interview, so I expect Weston to continue to provide a stern test for their opponents in their final few games.

It was great to see the level of support Weston brought with them this time around, I hope those fans keep getting behind their team week in week out now. Should they stay up I look forward to watching another two close games next season with at last a real derby feel to them with their increased support.

Photos used by Simon Howe, make sure you check out the full set here

Also sign up to Roman’s On Demand for extended highlights and interviews throughout the year!

A rare perfect day in football