Bath & Wiltshire Romans enjoyed a day out at the West of England 9’s on Saturday 7th May in Swindon reaching the semi-final before going down 24-22 to Cheltenham with a missed conversions being the only difference between the two sides.

Chris Chatten, Chairman, commented “the club gave another good performance in this competition after getting to the final last year and it was good to give some of our new players a run out playing some very entertaining rugby”

Teams were split into two group pools with the following teams taking part Southampton Spitfires, Gloucestershire Warriors, Bristol Sonics, Swindon St. George, Oxford Cavaliers, Cheltenham Phoenix, an RL Barbarians side (a mix of players from other clubs but mainly Swindon St. George), along with the Romans.

Beating Gloucestershire Warriors and Southampton Spitfires comfortably in the group stage the Romans became unstuck against the eventual winners Oxford Cavaliers; going down 22-0. However the two wins were enough to see them through to the last four where they faced Cheltenham Phoenix, losing 22-24 in a close encounter. Cheltenham then went on to play Oxford in the final, with Oxford winning 18-12.

The Romans are based at Corsham Rugby Union Club, Lacock Road, Corsham and are keen to welcome new players 16+ of all abilities to training currently on Wednesday evenings from 7pm. The club are interested in hearing from anyone who would like to sponsor the club in 2016 and have packages available for all budgets. The first home league fixture of the season is on Saturday 21st May 2.30pm KO against US Portsmouth Navy Seahawks. 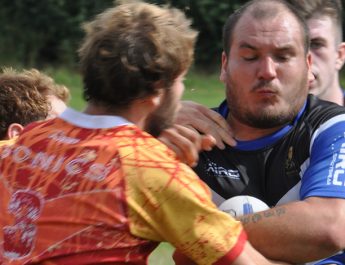 Sonics too much for Romans July 16