The events of this Saturday almost reversed those of two weeks earlier at home to Portsmouth Navy Seahawks. Then, Seahawks raced into a 28-0 lead after about twenty minutes; this week, it was Romans turn to race into a 26-6 lead but they still managed to lose the match by 48 points to 56 in a 19 try thriller, against local rivals Bristol Sonics.

Bristol hit back on the first significant attack of the game on 15 minutes, quick hands sending the ball wide to winger Jonny Mawer to crash over. Dom Swann slotted over a remarkable touchline conversion to reduce the arrears to six points, but with 10 minutes the visitors had extended their lead to 20 points.

First Riley completed his hat-trick with another mazy, long-range run, before Vuetanaotoka did the same. Fellow centre Ben Brierley was then put through a gap by Riley and raced away to score. Although Vuetanaotoka could only add one conversion, the Romans were 26-6 ahead and sitting pretty. On the back of a series of penalties, the Sonics roared back into the game.

Tries from Johan Schoeman – following a scintillating break and offload from replacement prop Curtis Asante – and Wes Long, the latter converted by Swann, brought the home side back within 10 points. When hooker Charlie Geary squeezed over for a try, again converted by Swann, the Sonics trailed by just 4 points. There was still time for a twist before half time, though, with the excellent Vuetanaotoka once again crossing the whitewash for a try he converted himself.

At half time, the Romans remained ten points ahead at 32-22, but there was still all to play for.

After a quiet opening to the second half, Roman’s Paul Riley scored another trademark score, converted by Vuetanaotoka, and many thought the Sonics had too much to do.

Now 16 points in arrears, Bristol needed a big response. They got it when Kieran Harvey somehow managed to bulldoze his way over from 10 metres out, Swann adding the extras, and prop Simon Bannistern scooting over out wide. Bristol were only within a converted score for a matter of minutes, though, before Ben Brierley grabbed his second try of the afternoon. Joe Knight’s conversion put Bath 12 points ahead with 18 minutes remaining.

The Sonics surged forward looking to make amends, and worked the ball wide to Elliot Nightingale. He spun away from a high tackle, stepped back inside and crashed over, Swann making no mistake with the conversion. With 76 minutes on the clock, Bristol finally levelled the scores. Prop forward Byron Jerome was hauled down close to the line, bit stretched out his arm and somehow managed to ground the ball close to the posts. Swann slotted over the conversion, and suddenly it was anyone’s game. With 10 minutes remaining, the ball was thrown wide to second rower Jack Harbirdge, who marked his Bristol debut by racing clear of some tired defenders to touch down. Swann’s conversion put the Sonics six points ahead for the first time.

There were still further twists to come. The Romans showed champion form to get up on the canvas and reply, hooker Leigh Wheatley capping a fine game with a much-needed score. With Vuetanaotoka off the pitch, Paul Riley stepped up to attempt the conversion. His kick floated well wide, meaning that Bristol still held a slender two-point advantage.
With just over five minutes to go, Bristol once again worked the ball wide to Harbridge, who broke clear before getting as near as he could to the posts before touching down. Swann calmly converted, giving the Sonics a vital eight-point advantage.

The Romans threw everything at the Sonics line in the closing minutes, but for once the home side’s defence held firm.

Chris Chatten, Chairman, commented “It was a game that was certainly exciting for the spectators with plenty of tries for both sides, but I am sure tackling practice will be high on the agenda at training this week. A win is sure to be just around the corner with a 4 point loss in our first game and an 8 point loss this week against last years beaten finalists, we now look forward to giving a Romans welcome back to the West of England League for Oxford Cavaliers on Wednesday 15th June. If you have not see Rugby League before I would encourage you to come along to Corsham RU Club on  the 15th June it really is an exhilarating sport”.

The Romans are based at Corsham Rugby Union Club, Lacock Road, Corsham and are keen to welcome new players aged 16+ of all abilities to training currently on Wednesday evenings from 7pm. The club are also interested in hearing from anyone who would like to sponsor the club in 2016 and have packages available for all budgets. The Romans are next in action when they take on Oxford Cavaliers at their Corsham RU Club, Lacock Road, home on Wednesday 15th June, 7pm kick off. 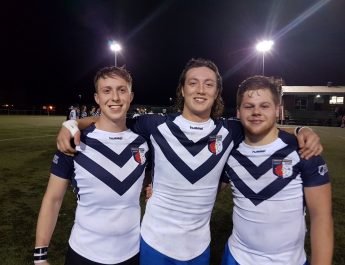