Now this is the part of the year I hate; no football!

Ok there has been some excellent coverage of the Euros on the BBC and ITV but come on this isn’t real football. Not that I dislike it though, it’s been great seeing the home nations (sorry Scotland) competing well in France this summer. The Welsh team have been a particular highlight as they have played some exciting attacking football and rightly go through as group winners above England. Best of luck to them in he Semi Finals now too!

However I can’t just walk on down to one of these games and pay on the gate, for me this is ‘proper football’. My team (just incase you’re a first time reader) is Bath City and over the last few years we have always signed up our squad early with very few trialists gaining a contract in pre season.

In some respects this close season has been the same as we have retained a good number of the first team squad. Our goalkeeper Steve Phillips has put an end to the speculation of retirement to sign another one year deal. He has a new job with Bristol Rovers to look forward to in the new season after a very eventful summer picking up a World Cup Winners medal. He was in net for the successful England Seniors team in this summer’s Senior World Cup held in Thailand.

Defenders Dan Ball and Jack Batten will link up again at centre back with utility man Chas Hemmings also signing on. Recently released Bristol City loanee Billy Murphy was quickly snapped up to carry on his good form with Frankie Artus in midfield. Fans favourite Nick McCootie and Andy Watkins have also signed but Owers will be looking for a better goal return from this strikers this season.

Owers has also been busy bringing in two new faces to the fold. George Rigg joins from Weymouth after long talks with the club and the experienced Stuart Fleetwood joined the City front line. I haven’t seen much of either of these two but going on Owers previous spell at Twerton Park I have every faith that the pair will add a much needed attacking element to our play.

So that leaves 10 players signed on from a possible 16-18 (depending on budget) which will allow for plenty more signings in the coming weeks. That means it will give pre-season a lot more meaning for players and fans alike. The rumour mill goes into over drive come the first friendly of the season. It’s exciting finding out which players are in the match day squad and where they come from.

Then bang! The first pre season game on July 2nd; this is the earliest friendly City have ever had. Partick Thistle are the opposition as they are on a mini tour of the West Country having already defeated Cirencester Town 6-0 on Wednesday.

Not many City fans were optimistic before the game, predictions of getting thumped 4,5,6,7-0. However City gave a great account of themselves in front of 300 odd fans to dispatch 4 past our full time Scottish Premier opponents without reply!

The 4-0 victory came with goals from Murphy (pen) – making it 1-0 at the break – then McCootie, Shaquille Hunter and an OG. City started with just one training session and ten players signed on; with big Chas Hemmings still on holiday. Dan Bowman was also noticeably absent on holiday with Owers hopeful of convincing the young defender to stay for another season.

So this meant two trialists started for City; Manny Monthe (CB) and Lee Marshall (CM). Monthe has had some performances he would rather forget on Twerton Park in recent seasons for Havant and Hayes respectively. However he put on a powerful and committed performance; rarely losing out in a header. Marshall has just been released by Swindon Town after making 2 starts and a further 4 substitute appearances for the Robins. He had a solid game alongside Artus and Murphy and will be looking to cement his place in the coming games to win a contract with City.

The bench was made up of a blend of youth and trialists with Hunter making the biggest impact with his goal. The former Bristol Rovers man made space to open up his body just outside the area to curl in the 3rd goal past a flat footed Jags keeper.

Josh Hutchinson turned in a near flawless performance after being introduced after 18 minutes for the injured Fleetwood. The youngest wasn’t overawed by the opposition and lead the line well alongside McCootie; who also came back looking fitter and stronger than last season. One player who will be hoping for more game time is the talented Ryan Bole. Last season’s youth teamer will be looking for more minutes over the coming few games before committing to City. Otherwise the teenager could be off to a local league club to help further his career.

The rumour mill is now in full flow and one of the trialists for City has been signed on; which will be confirmed in the next few days.

There are some high calibre home friendlies coming up:

Hope you can now enjoy the friendlies this summer for your local team.

Also if you liked the video let Adam know on Twitter!

Make sure you sign up to Romans On Demand for all of the latest games, goals and interviews! 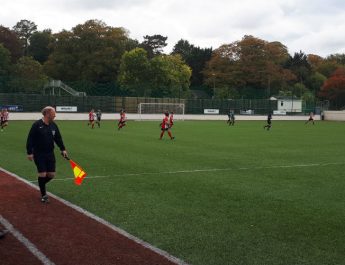