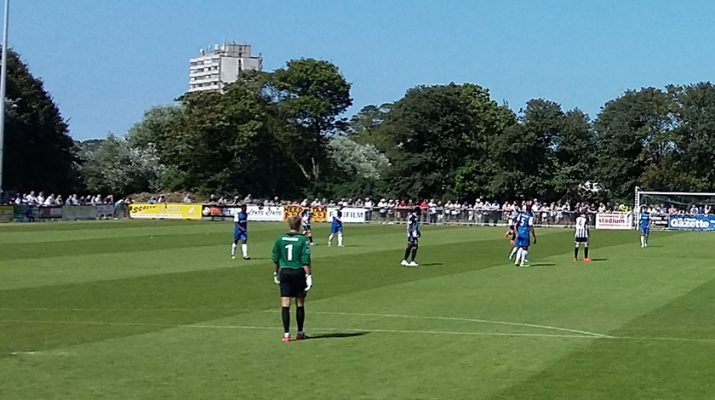 First game of the new football season brings optimism, promotion ambitions and joy to fans up and down the country. Fans of Bath City are no different and around 60 or fans made the long trip down the M4 – M25; which is a common occurrence in this league. At least this is the longest trip of the season down this stretch of motorway and not one many would like to take again.

Upon arrival the club officials were very helpful to those who travelled on the supporters coach and the bar staff were friendly throughout. Looking around the town and the ground this is clearly an area of the country which needs investment. The ground is half built at best, summed up by the sign in the bar claiming that the club take no responsibility if you fall on the uneven floor due to the building work.

So I was quite sympathetic to their cause to start with. This began to wain when I read their manager’s comments in the programme; claiming that Bath tried to relegate them last season.

Now I was always under the impressions that you have to try and win a game of football by as many goals as possible, in every game you play right? So last season when City played Margate on the last game of the season that’s exactly what we tried to do, winning 2-0 at Twerton Park. This happened to keep Margate up by 1 goal in goal difference. It wouldn’t be fair to play in any other way and Gary Owers will always set his team out to win games by as many goals as possible.

So on to the game itself; very even throughout and a draw would have been a fair result. Margate took their goal well with a late strike from outside the box with Bath’s defence a touch slow to close down in the final few minutes. Naby Diallo had an excellent game in the middle of the park for the visitors and was involved with everything positive going forward. New signing Marvin Morgan looked dangerous in patches and will be a real asset for Bath once fully match fit.

Finally even though Josh Hutchinson was only on the pitch for 10 minutes or so he caused the Margate defence problems. It would be great to see Hutchinson start on Tuesday night and show the Twerton Park faithful what he can do for 90 minutes.

I’d love to go into more detail about the game but the Bath Chronicle have stepped up their reporting over the last year and are now producing quality content week in week out on the club. Unfortunately I feel I have to report on the negative experience I received once the game had started and afterwards.

It’s not something I particularly want to do, but it’s a side of football that needs to be addressed and tackled head on. I must also point out that experience on Saturday doesn’t reflect the majority of Margate fans and certainly not the club officials (although they must take some blame, which will be explained).

‘Fans’ behaviour soured my day out to Margate as every home ‘fan’ I came in contact with seemed to want to start an argument or a fight. Again the inverted commas are needed as those individuals aren’t, in my eyes, fans of non league football.

The first instance was at the snack bar during the first half. I was eating my food watching the game and decided to make small talk with the chap next to me. Now usually one plus point of non league football is that you can comment on how the game is going with the opposition fans and you’ll have a chat about football in general.

Not this guy though, he was aggressive from the off saying how Margate were going to win and that’d we’d be going home crying. Well he was right about the first part! Obviously this guy wasn’t the man to make small talk with so after a few more snappy words from him I left bewildered at how hostile someone could be. I mean this could have been a one off and I’m sure some early afternoon beers had got to him.

So at this point I should mention that Margate allowed you to drink for the full 90 minutes with beer served in plastic cups. Many people took advantage of this, with seemingly beer flowing for the entire game, but we’ll come back to this.

In the second half both keepers had done their part to keep their respective teams in the game but then around the 90 minute mark Margate took the lead. There was just 3 minutes injury time and deep into that City had a freekick around middle of the pitch on the left hand side where I was watching from.

The ball had been hit forward before the whistle blew so Marvin Morgan went to fetch it in a hurry and passed it back up the line for Dan Ball to take. Number 17 for Margate – Marcel Barrington – decided to stop it getting there which caused the crowd to yell at him and the ref to get on with it. He then turns his back to the officials and gives us the middle finger.

Now swearing you get it more frequently at non league, everyone knows that, and the player do get a fair deal of stick. It’s part and parcel, rightly or wrongly, at all levels but there has to be a air of professionalism even in the non league game. He knew he would have been carded should the officials have spotted this and if that was the end of it I wouldn’t have written about it.

A moment later the final whistle went and of his own accord he looked straight back over and did it again. Absolutely no need for it! Now what would have happened if a member of Margate under 10s saw this, or any child for that matter, is that the club want their players to conduct themselves down there? Aren’t football role models?

You’d have thought that would have been it (sorry you’d have been wrong). It was the ‘fans’ turn again to single out anyone wearing a Bath City top passing them on the way out. A small group of around 10 lads or so, all with a beer in hand, took it in turn to yell at us on the way out.

I’m not so sure I would claiming that Twerton Park is a (lets say dump) whilst enjoying your football every other week at a ground in progress (they have somehow lost a stand from last season). There were offers of fights too but when I went up to group of 6 or so it was evident they didn’t want to follow through with these threats. Equally they didn’t want to talk about the game just throw insults back at me and anyone else supporting Bath.

Again this isn’t uncommon to have a small group of fans causing a bit of trouble but coupled with the programme notes/the other altercation/Barrington it didn’t make me want to return in a hurry. This is a real shame as I said the officials are seemingly trying really had to raise money to continue ground improvements which are sorely needed.

However getting a lager brigade to show your fans out week in week out really isn’t the way of doing this. There were further altercations outside the ground and in the town with anyone in black and white but thankfully no fighting. It looks like the beer makes people brave enough to shout the odds without any follow through.

So the club officials may need to keep more an eye on their main stand where people exit the ground so that this doesn’t happen again to another away set of fans, or simply ban beer going outside of the bar.

Best of luck to Margate and those fans who have supported their club through thick and thin after their fall from the Conference Premier. Hopefully see many of you at Twerton Park later this season!