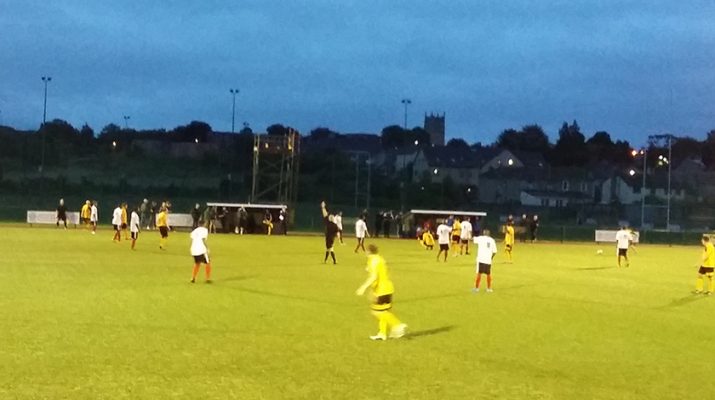 The returning Szymon Gromek couldn’t stop Chris King’s men in the second half as they beat Western Premier side Hallen AFC with two second half goals; after going in to half time drawing 2-2.

Hallen’s keeper was called into action early on, saving Jason Adam’s effort from a corner inside ten minutes. It wasn’t long until Keynsham drew first blood thanks to Kyle Box on 14 minutes. A rather fortunate deflection on a through ball fell kindly for the number 10, on the edge of the box, who shot first time leaving the keeper rooted to the spot.

This sparked a positive reaction from Hallen with their player-manager Tom Collett leading the front line in the number 9 shirt. On 29 minutes he beat the Keynsham number 1 only to see his fiercely struck shot come back off the post; having been released into the box. Keynsham were on the back foot for a ten minute spell and conceded on 36 minutes.

Hallen were now playing the ball around well in midfield and when a long distance shot was only partly cleared Collett wasn’t going to miss twice. The deflected clearance fell to the striker outside the area, he took two touches to get it round his marker and out of his feet before finishing well.

King then switched his two wingers around in an attempt to halt this run of attacking pressure and soon enough Keynsham were ahead again. Harry Ollis, now on the right, controlled the ball and played in overlapping full back Tauren Williams inside the box. The Hallen keeper narrowed his shooting angle but Williams managed to square it to the arriving Pat Davison who managed to bundle the ball over the line, despite a last ditch effort to block it by a defender.

On 45 minutes the scores were level again, thanks to Collett. Hallen broke forward at pace and the striker lifted his head up from around 30 yards and released a dipping shot; sending the teams in 2 goals apiece at half time.

Keynsham made four chances at the break as they looked to take the game to Hallen. Tom Harris, on at half time, was the first to test the Hallen keeper who saved well from a one of one. Matt Brown then had a golden opportunity to open his Keynsham account this pre season from 6 yards. Ben Harris managed to get to the byline to drive a ball across the box, missing Davison and hitting Brown but his hasty effort flew past the post.

The Hallen keeper was staking a decent claim on the number one spot this season as he kept his team in the game. 53 minutes in and T Harris crossed for Brown who struck a great half volley only to see it saved one handed. A moment later Adams was denied again with a finger tip save this time a follow up from a set piece.

Davison and B Harris both had good opportunities before the deadlock was finally broken on 68 minutes. Hallen had just started to push on into Keynsham’s half a bit more and game the looked to be changing until Brown got his first goal for the K’s. The striker managed to time his run well and was played in on the right with a smart finish at the keepers near post.

The victory was rounded off with a deserved goal for Adams with just nine minutes to go. B Harris’ corner was drilled in low and hard with the block coming out to an unmarked Adams. He had the time to take a touch and apply a controlled finish through a crowded 6 yard box.

So it looks like Gromek won’t be adding to his 33 appearances and 4 goals he accumulated between 2011-14 but one Keynsham Town old boy will be. Sam Roberts has re-joined the Ks after two years at fellow Western Div One side Roman Glass St George, after completing pre season with the Ks. The left back will be hoping to build on his 58 appearances in just two seasons between 2012-14; having also chipped in with 2 goals from defence.

Best of luck to Hallen AFC as they look to build on their mid-table finish from last season.