Two stunning goals ended an action packed kick off to the new Western League Div One season for Keynsham and Almondsbury. Harry Thomas hit a great shot from outside of the box to leave Ashley Wintle rooted to the spot in the 91st minute to give Almondsbury a point. However young full back Jordan Anstey had other ideas as he lashed in his first ever goal for the Keynsham first team to give the home side all 3 points. 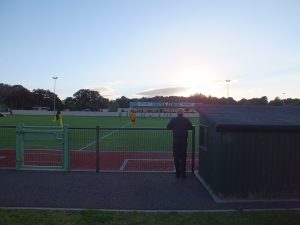 The game started brightly for the home side with new signing Matthew Brown linking well with Sam Duggan up front forcing a one handed save from visiting keeper Matt Semple. Duggan turned provider on 20 minutes when the front man played through Aaron Childs; who blazed over his one on one. Brown almost opened his Keynsham account 8 minutes later as he burst through the middle only to find Semple in good form again.

Jordan Davies was Almondsbury’s main threat in the first 30 minutes with a couple of long shots. The Keynsham pressure eventually yielded dividends and they took the lead on the 35th minute. Ben Harris took a corner from the left hand side which Duggan read well and stooped to head home.

Last season’s top goal scorer Harris broke on the left but Semple thwarted another attack to keep Almondsbury in the game as half time approached. His counter part Ashley Wintle was then called into action at the other end. Taylor Anderson read the short back passing to steal the ball away the K’s defence; beating two defenders only for Wintle to save one handed.

Substitute Dean Jones then headed over from a corner for Almondsbury just before half time. 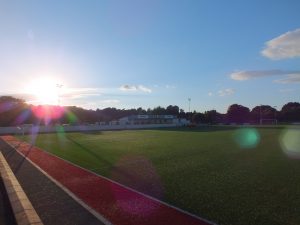 Almondsbury came out of their half time team talk with more intent in their play and were soon level. Jones was causing problems going forward for the K’s defence and his shot was blocked in the box. However the rebound fell to Joe Weare who thumped home the equaliser from inside the box.

The response from the home side would have pleased Chris King and his management team as his side took the lead again on 58 minutes. A set piece caused panic in the box for the visitors as Tauren Williams and Harris both had shots which kept bouncing around the box. Then Williams managed to find Brown from 6 yards out who couldn’t miss.

Both sides were breaking well in the next ten minutes as both teams tried to wrestle back control of the game. Duggan had dropped back to a more attacking midfield role and managed to find some space to roam forward. On 70 minutes Duggan rattled the cross bar when he found space on the edge of the box.

It looked like Keynsham had done enough for a well deserved win come the 90 minute mark but there was another couple of twists to come. Harry Thomas struck a bolt from the blue on the 91st minute from around 35 yards which left Wintle hapless to stop the shot.

One feature of Keynsham under King’s management is that they never give up and with moments to spare they won the game. Harris took a short corner in the 93rd minute to full back Jordan Anstey to put into the box but the youngster had other ideas. He stuck a fierce shot which flew into the net to the delight of the home crowd; this was his first senior goal.

It was a great advert for Western League football and it looks like this season will be very competitive. I managed to meet ground hopper Tom Meadowcroft who has taken all of the photos in this report. Based in Bristol Tom has started blogging about his football experiences at all levels since last season.

You can check out his work here, it features a lot of reports from all around the Bristol. Well worth a rea