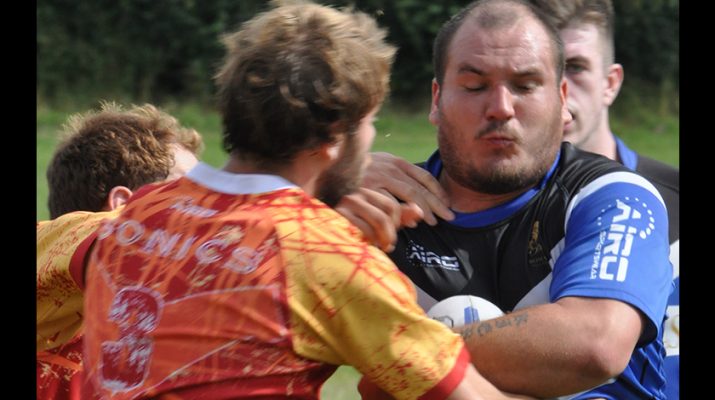 Bristol Sonics produced a dominant second half performance to pull away from Bath & Wiltshire Romans and secure a 22-56 win in an entertaining local derby at Corsham RFC.

The Romans were just four points behind at the interval following a closely-frought first 40 minutes, but the Sonics took control early in the second half and never looked back. Bristol scored six tries without reply in the closing 25 minutes to cement their position in the top two of Pool A of the West of England League, and guarantee their participation in the end of season play-offs. While the Romans are sure of a play-off for the chance to appear in the West of England Plate Final.

Both sides came in to the match understrength. Bath took the opportunity to blood a trio of new recruits, and started brightly with some strong defence on their own line then winger Mike Perry was the first to react to a bobbling, cross field kick from Sonics scrum half James Potts. He hacked the ball forwards, scooped it up, and ran clear of his opposite number to dive over in the corner.

Bath’s lead didn’t last long, though. Three minutes later, Bristol hooker George Burnie scored a fine individual try, which was converted by prop forward Kieran Harvey. It wasn’t long before Bristol extended their lead, scrum half Potts beating a swathe of desperate defenders on a 45-metre run to the line. Harvey once again added the extras.

Byron Edwards, slipped a one-handed offload to James Potts. He broke clear, switched the direction of play and found second rower Joe Singleton with a perfect pass. Somehow, Singleton managed to get the ball to the supporting Burnie, who finished off. Kieran Harvey’s attempted conversion bounced off the post.

The home side had been starved of possession, but soon began to see more of the ball. A period of pressure close to the Bristol line ended in a much-needed score, with Mike Perry jumping highest to collect a superb high, cross-field kick and dive over. Andy Williamson added the conversion, to drag the Romans back to within six points.

Bristol were forced to shuffle their pack when Matt Blacker had to rush to hospital with a deep head cut, following an accidental clash of heads. It took them a few minutes to readjust, but soon they’d extended their lead to 10 points. There was little glamorous about George Burnie’s close range effort, but it was a significant one; it was the utility forward’s third.

Bath refused to give in and capitalised on a stray offload from the Sonics Byron Edwards, which was picked up by the evergreen Bruce Vuetanaotoka. The Fijian centre had enough pace to sprint 50 metres and touch down between the sticks. His conversion was the last action of the first half, with the Romans only trailing 16-20.

The Sonics quickly extended their lead in the second period and began to pull away from the Romans through a barnstorming run from centre Tom McIntosh, who also converted his own try.  Bath hit back quickly through a try in the right corner from Bruce Vuetanaotoka, brilliantly converted by Andy Williamson.

As the second half wore on, Bristol began to overawe their tiring defence. Six further scores followed – three converted by McIntosh. There was a close range effort from Byron Edwards, a brace from Morgan Lewis, a second of the afternoon for the impressive James Potts, and a typical prop forward’s try from Louis Mizen, who had played well since coming on for the injured Matt Blacker. The scoring was completed 90 seconds from time by McIntosh, who collected a cross field pass from Lawrence Roycroft and sprinted 40 metres to dive over in the left corner.

“We have not had the luxury of being able to field a settled side this season, but we can still look forward to the play-offs in two weeks time, playing for a place in the league plate Grand Final. It was an opportunity for us to give some players who are new to the sport a bit more game time. James Noott came in on the wing and is improving every game he plays, Andy Williamson made his debut and first ever rugby league game, looking like he had been playing the game all his life showing some nice touches in attack, while Mike Perry in his second season with the club was outstanding on the wing with a brace of tries and also playing through the pain barrier towards the end of the game. Kieran Dry also impressed on his debut and could have a real impact in the forwards for the rest of the season. We are now looking forward to the short trip to Swindon”

The Romans are based at Corsham Rugby Union Club, Lacock Road, Corsham and are keen to welcome new players aged 16+ of all abilities to training currently on Wednesday evenings from 7pm. The club are also interested in hearing from anyone who would like to sponsor the club in and have packages available for all budgets. They would also like to hear from anyone who would like to help develop the club both on and off the field.

The Romans are next in action when they take on Swindon St. George away at Supermarine RFC Saturday 6th August 2016, 2.30pm kick off.

MAN OF THE MATCH AWARDS

Romans are marching on July 2015