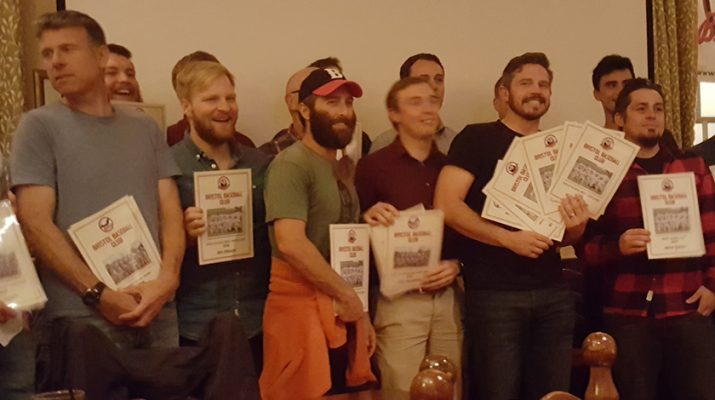 Bristol Baseball Club brought a successful season to a close on Friday 16th Sept at its 7th Annual Awards night.

Both the club’s teams finished with winning seasons. The Badgers finished second in the SWBL with a 6-3 record while The Bats finished third with a 5-4 record. Both teams were the only ones to push the eventual champions, the Taunton Muskets, hard over their four games.

The club handed out awards to players from both teams for their outstanding performances and their contributions to the club at the ceremony held at the Lansdown in Clifton.

“It is important that the club recognises players who put in good performances across the whole season as well as those who make contributions in other ways to make the club successful,” said club director Tim Clough. “We now can start preparing for next year, recruiting more players, improving our standards and spreading the baseball gospel across the area.”

Tom Hollies was the MVP for the Badgers for an outstanding all round season with the bat and as the team’s leading pitcher.

Dan Looney was awarded the Bats MVP for a series of performances which often kept the team in tight games.

The Badgers catcher Rhodri Theaker walked away with six awards during the ceremony mainly for an excellent year with the bat.

One of the most important awards for the club is the most improved player of each team. Simon Frankcom from the Badgers and Paul Carter from the Bats were the two recipients of this accolade.

“The whole season has been fantastic,” said Simon Frankcom. “Its a game I have always followed and it was great to find the club and learn from the more experienced players week after week. The award is the icing on the cake.”

Bristol Baseball Club will be holding an introductory session for people interested in taking up the sport in the New Year. Details will be published on the club’s website www.bristolbaseball.co.uk once details have been finalised.

Centre of Excellence could be coming to Keynsham